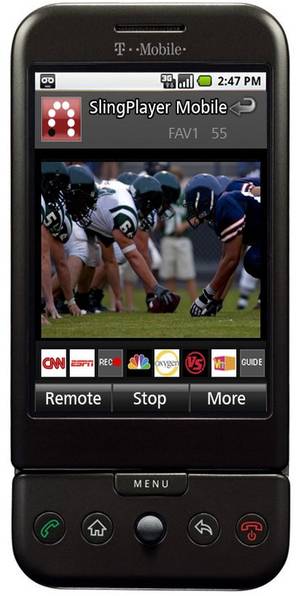 A few sources, including one of our very own, have come across an un-official confirmation that Sling Media’s mobile player will make its way to Android handsets. SlingPlayer is software that allows streaming of user content from Slingbox, a home media set-top unit, over the internet to computers and other mobile devices. We don’t have any timeframes just yet, but a software developer connected with Sling Media has targeted Android as the next potential platform to tackle.

Sling Media forum user and developer MegaZone writes, “At this time we have not officially announced any development for Android or webOS, but we’re keeping an eye on both of them. Android seems to be the next logical platform, looking at the overall market, and Sling reps have talked about it a few times. I believe some have gone as far as to say it is our next platform, but I won’t since we haven’t made any announcements. The kind of support we’re seeing through the OHA is very promising, and if even some of the announced devices and partners come to market it will be a strong player.”

“There has to be a business justification to invest the resources in developing the client. The next logical platform is Android, which we’re already taking a strong look at. Unlike webOS, Android already has multiple announced devices with commitments from several major device makers for even more, with carriers lined up world-wide. Remember that from our point of view it is the intersection of users with the platform *and* a Slingbox who are also interested in using SPM. Engineering resources aren’t free, so there has to be some return on investment.”

Without coming out and saying, it would appear Sling Media has taken a wait-and-see stance with webOS, sure to be another heavy competitor in the smartphone arena. With several Android-based phones already announced and more reportedly on the way, the platform seems indeed logical as the next obstacle Sling Media must overcome in taking over the streaming media universe.

Purely as speculation, one has to wonder if Sling Media would host some type of beta program with a mobile application on Android, given the open-nature of the platform. Wouldn’t that just be aces?