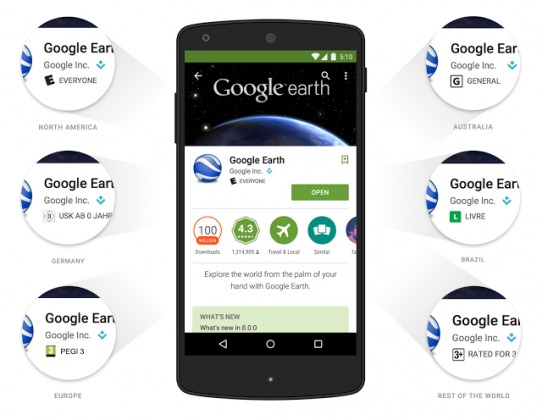 A few months back, Google told developers that there will now be a new app rating system, based on which region you submitted the app to. The questionnaire that they submitted will be reviewed by the appropriate body and then the app will be given a rating, depending on the standards of that region. Now that rating system has gone live, on the web version, and is still rolling out to the mobile version of Google Play Store.

You’ll be able to see the new age and region appropriate ratings under the app ratings on the web version of the Google Play Store. They would vary sometimes depending on which region you submitted it to. For example, one of the review bodies is the International Age Rating Coalition and in the US, the ratings are as follows:

E – Suitable for all ages, but may also contain minimal, mild violence (as with cartoons, fantasy elements), and occasional use of “mild language”

T – For teens, 13 and up. Content may include juvenile, crude humor, a little bit of blood, simulated gambling and “possibility of strong language”

M – For age 17 and up because it contains intense violence, sexual content, and strong language

AO – For adults only, ages 18 and up, because of the addition of graphic sex and gambling with actual money

Developers would have to fill up a content-related questionnaire before they submit their product to Google Play Store and then Google will pass it on to review bodies who will give the appropriate rating. Even existing apps had to have their content ratings done as well. The ratings are still rolling out for the mobile version of the Google Play Store but is already visible on the web version, if you’d like to check them out.