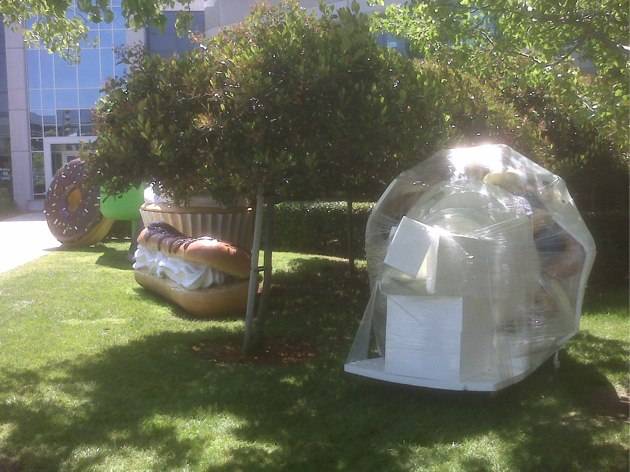 In classic Google tradition, it seems that the large, plastic sculpture representing the next iteration of Google’s mobile Operating System (OS), Android, is now sitting out front of the Mountain View headquarters. But, unfortunately, it’s still wrapped up, and despite some determination from another journalist, it’s going to be kept that way for at least a little while longer.

TechCrunch apparently caught wind that Google was putting up the Froyo sculpture last night, and so they sent out of one of their intrepid writers to find out what was going on out there. When she got there, she found that the frozen yogurt sculpture was still hidden under some pretty heavy duty saran wrap. When she tried to remove it, to get a better shot, some Google employees threatened to call security on her. So, obviously she took the best shots she could.

There’s still a lot to be desired here, but at least we know it’s there. And, it’s good to see Google still having fun with their statues. We’re just as excited to see what the sculpture looks like, as we are to finally get Froyo on our devices. In the mean time, though, what’s your favorite sculpture up right now?