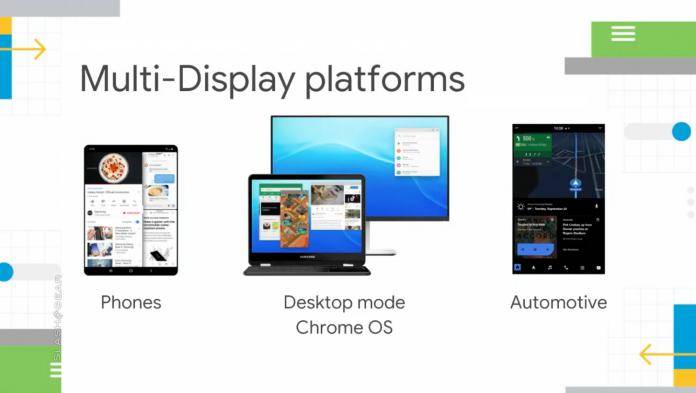 After Android support for foldables, Google may be working on Multi-Display for multiple devices. Actually, the tech giant has already started the Foldables category. The software experience may not be far from what we’ve been used to but there will be important changes and adjustments developers and users may need to take note of. A foldable phone will be unveiled by Samsung next year and with it comes the first real “foldables” experience as delivered by both the South Korean OEM and Google.

One notable feature will be the multi-display app functionality. The Foldables category will be able to show multiple apps at the same time. It’s like multi-window but an improved version.

To be specific, “multi-display” is for multiple screens. The idea is for an app to show up on different screens without much change on the interface. Simply put, it should adapt to whatever screen or platform is present.

Google has been working on multi-display app support, encouraging devs to work on such so mobile users can seamlessly transfer from a smartphone to a tablet to desktop or maybe even a smartwatch.

One perfect example is Android apps running in Chrome OS as shared by Google Engineer for Android Frameworks Andrii Kulian. There’s also the idea of Automotive Android for vehicles that have multiple display and device inside for the whole group or family.

The tech giant will soon be requesting more developers to work on their apps to support Foldables. They shouldn’t be much different from one another but here’s what Kulian said about making apps work:

“To verify your app behavior, on any Android device running “O” [Oreo] or above, you can create a simulated display through Developer Options and watch your activity there. Unfortunately, at this moment, simulated display does not handle touch. We are working on improving this experience in the upcoming releases, and we are going to be adding new developer tools.”

Further improvements will still be made so watch out for official developer guidelines. In the future, Android Q is also said to include a “Multi-Resume” feature which we’re assuming is possible on a foldable-flexible display. For this Foldables category, the Android team’s top three goals are Screen continuity, Multi-resume, and Multi-display.