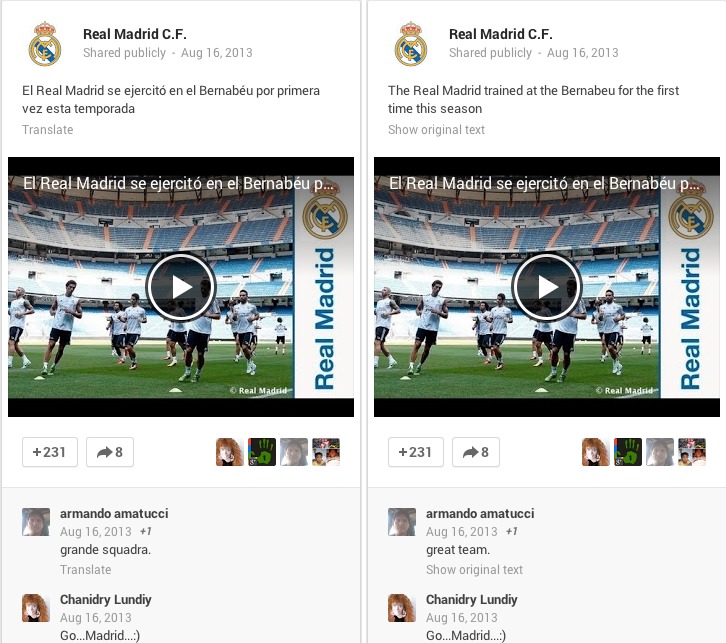 Google is getting ready to bring language translations to Google+. This will initially be available on the desktop, however in time it will also arrive for those using Google+ on a mobile device. Simply put, once this rolls-out to your Google+ account you will be able to translate a post with just one click.

The details have been shared by Google’s Ed Chi who mentioned that “whenever there’s a public post or comment that isn’t in your language, you’ll now see a “Translate” link underneath the text.” Once the translate link is clicked users will see the text translated. A second click of the translate (Show Original Text) link will return things to your regular language.

Otherwise, users will also be able to set (or check) their language preferences by heading to the settings. These can be found by navigating to www.google.com/settings/account. Anyway, as we often see with changes and updates from Google — these translations are being rolled out on a gradual basis.

In other words, if you are looking for this, you should just keep an eye out for the “Translate” link. As mentioned earlier, this is coming first to the desktop and later to mobile. So far there hasn’t been any time estimate as to when the mobile app will have the translate link added.

That aside, we have seen fairly regular Google+ app updates in recent months. The most recent arrived just a short time back and improved location sharing, dropped the need for Messenger (in favor of Hangouts) and made it easier for those using multiple Google accounts.