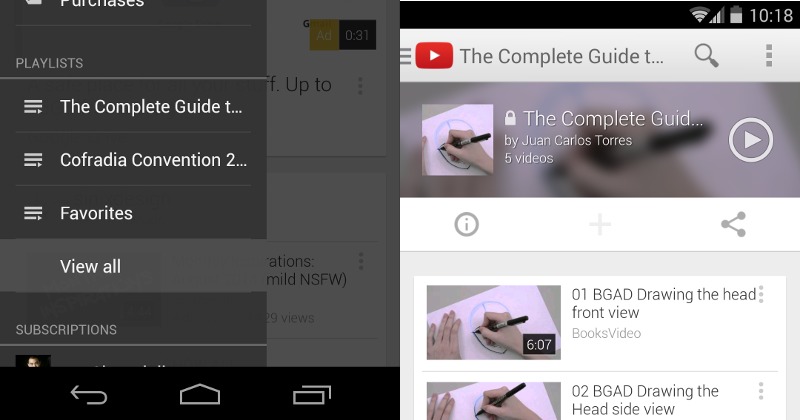 It’s that time of week again and, while last week as quite a no show, Google is pushing out a few updates to its Android apps this time. In this round, we’re seeing a bunch of minor changes to YouTube’s playlist handling and Play Music’s home screen widgets. Plus, Google Search gets bumped up to 3.6, brining in in-app indexing support.

In-app search via the Google Search app has been a long time coming. Revealed late last year, the feature shows users search results that include information found inside apps. All the user needs to do is tap away and they will be taken directly to that app’s contents. Initially available only to a few select apps, Google opened the doors to all developers in July. However, it is only this new version 3.6 of the Search app that those results will be shown via search autocompletion.

YouTube has gotten a very minor facelift as far as its menus are concerned, in particular those related to Playlist management. In the sidebar navigation menu, there is now a “View All” option that will take you to your full roster of playlists. The individual playlist pages have also seen a very minor modification, swapping out the “thumbs up” icon, which is of course more associated with Facebook, with a more ambiguous plus icon, which has the same function but might be mistaken for an “add” action.

Google Play Music was also touched up a bit, with the “Download Queue” area relabeled as a more meaningful “Manage Downloads”. Bulk of the changes, however, can be found not in the app itself but in its widgets, with a new 1×1 “I’m feeling lucky” widget, that uses a dice icon and animation for added visual emphasis, and a 3×1 white colored widget that can be resized up to 4×4.

As always, distribution of these app updates take time and are dependent on the region. So best seat tight and wait for it to come if any of those new features tickle your fancy.