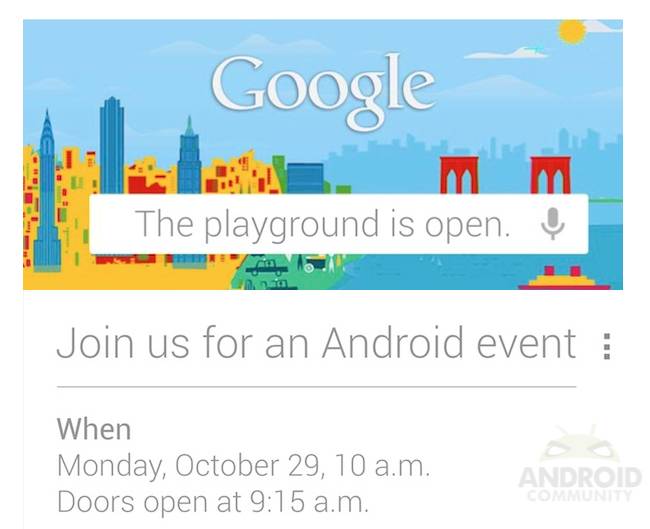 It’s time to get excited folks! Google has just reached out and pinged us with a quick event invite set for later this month. It looks like we’ll soon officially get introduced to the LG Nexus 4, and possibly even the 32GB Nexus 7 that has been floating around for the past few weeks. Check out the invite below.

Google is holding an “Android event” on October 29th in NYC where we can expect a variety of goodness. For starters we are expecting the much talked about LG Nexus 4 to be officially announced. It has leaked multiple times over the past few weeks and we’re pretty certain it’s coming sooner than later. We’ve heard October 29th before, so get ready guys! One important note is previous events (like the Galaxy Nexus) the invites had a manufacturer attached — here we don’t have that.

The LG Nexus 4 isn’t much of a secret, so we shouldn’t really be seeing anything new from that aspect. The other important parts are if we’ll see Android 4.1.2, or Android 4.2 on board with the device. That isn’t all either. There’s also been plenty of rumors of the Google Nexus 7 tablet getting a price cut and a boost in hardware. Google may also announce the 32GB Nexus 7 will replace the 16GB model at the $249 price point — which we’ve been seeing for a few weeks already.

Other tidbits could include the “Nexus program” where we’ll be seeing multiple Nexus smartphones all running stock Android this holiday season. I’m also still hopeful for a 3G/HSPA+ capable Nexus 7 to grace the Google Play Store. We’ve heard that is also a “confirmed” device — although we’ve only heard rumors for now. You know we’ll be there live, so stay tuned right here to Android Community!