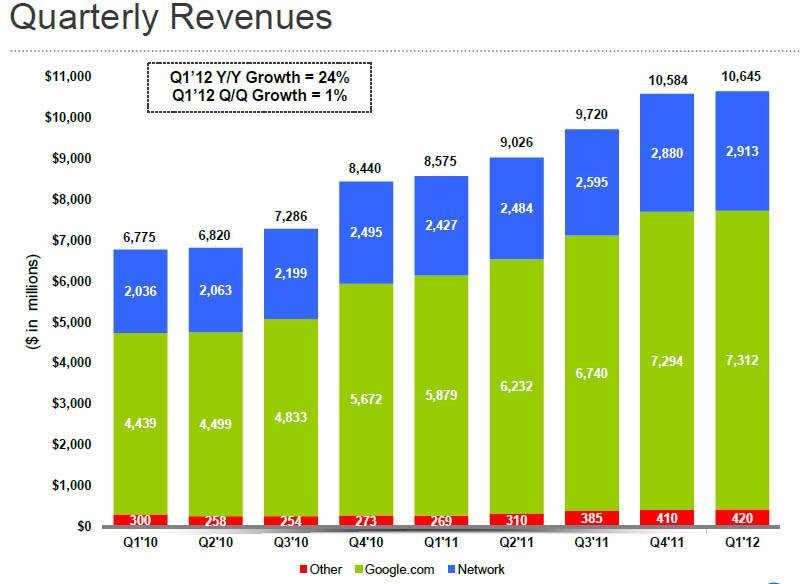 Ready for the most exciting news of the day? Well, this isn’t it, unless you’re just getting off your shift on the NYSE. Google’s posted its quarterly results for the first quarter of the year, and while generally rosy, they’re nothing to write home about. In total, Google took in 10,645,000,000 dollars in January, February and March, up 24% from the same time frame last year but gaining only one percent since the last quarter. Compare that to the difference between Q3 and Q4 off 2011, when Google increased its income by about 8%.

Google remains about half and half as far as US and international revenues go: 46% of its income comes from the United States, a statistic that’s held relatively steady for two years. Google’s total costs for Q1 were $7.25 billion, giving them a little more than three billion dollars in profit – a win for just about anybody. For the quarter they keep 3.08 billion in cash reserves and add it to their considerable pile.

Google remains one of the largest and most powerful Internet companies, even if their actual revenue doesn’t match the likes of Microsoft (17 billion income, 6 billion profit in Q4 2011) or Apple (26 billion, 6 billion, respectively). The report doesn’t mention Android activations or Google Play Store numbers, so presumably they haven’t grown dramatically from the 850,000 activations a day announced at Mobile World Congress.