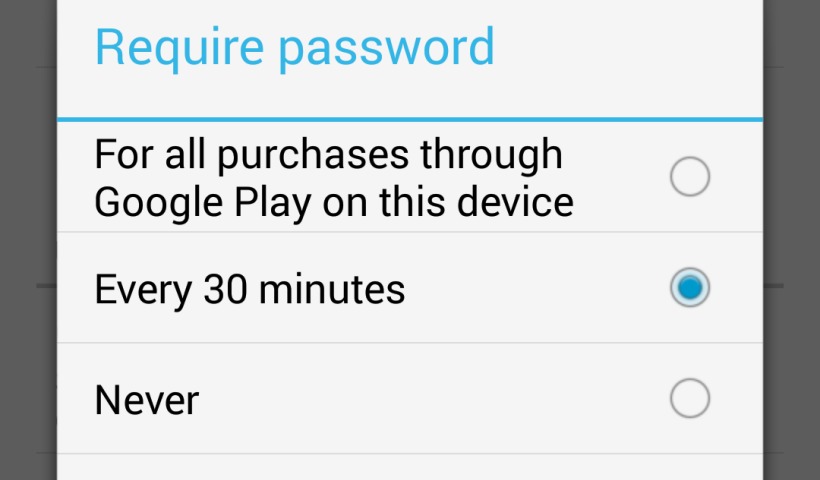 Google has just started rolling out an update to the Play Store app on Android that, among other things, now offers more fine-grained control when making purchases. This change could very well be related to the class action suit that the company is now facing.

Early this week, Google was hit with a class action suit over how lax its policy was for in-app purchases, which can end up costing users hundreds of dollars. In the current setup, Users will be asked for a password when making a purchase but subsequent purchases within a 30 minute timeframe will no longer require a password. This is a rather dangerous configuration, especially when children and games with in-app purchases are involved, a lesson that Apple learned the hard way as well.

Now Google is providing a way for users to determine exactly how or when they want to be prompted. The 30-minute window is still there, but now users can opt to be asked for their passwords for each and every app or in-app purchase, or never at all. Hopefully, kids won’t be knowledgeable enough to find their way to this setting and turn it off.

Related to in-app purchases, Google Play Store now adds the IAP indicator directly into the permissions window. Hopefully users that read those windows will be able to better notice when the app that they’re buying offers extra features for a price. The Play Store app has also been revamped a bit, relocating the Settings and Help menus directly in the sidebar instead of existing separately. The confusing phrasing of “Auto-add widgets”, which actually adds icon shortcuts and not widgets, has also been changed to “Add icon to Home screen”.

Google Play Store version 4.6.16 is now going out to users in staggered rollouts. Starting with this update, however, users will be able to try to force update their Google Play Store app by simply tapping on the Build version label in the Settings screen.