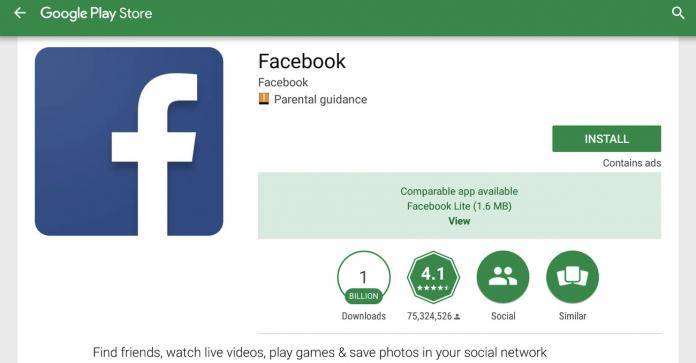 Google has been wanting the mobile arena to be lighter than ever. It has introduced Android One which was actually a no-go so there’s Android Go as a replacement. Announced only a year ago, Android Go has rolled out in other countries starting with India. As more Android Go phones will be introduced in the coming months, expect more apps to have Lite versions. We’ve tested a few including Google Go, Files Go, Google Maps Go, Google Assistant Go, YouTube Go, and Gboard Go.

Recently sighted on the Play Store is a lite version of the Facebook app. We already know there’s a Facebook Lite app but what’s interesting is the fact Google lets a mobile user know a Lite version of a particular app is ready. According to Redditor banksio, he saw a note in the Play Store that says ‘Comparable app available’ and a suggestion complete with file size information.

We have no idea what other apps will show other “comparable titles” but this is a good start. We tried checking the Play Store on our phone but it doesn’t show the message. We’re assuming this feature is rolling out slowly. Let us know if you’ve seen the same message while checking out apps on the Play Store.