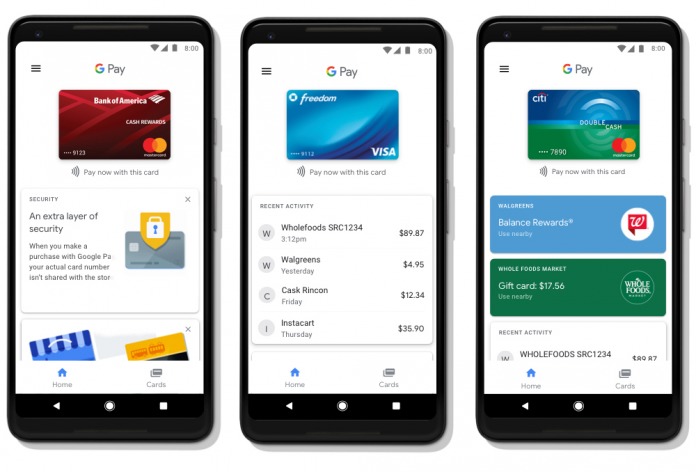 We’ve known that Google will reunite the features of Android Pay and Google Wallet under one brand, and now it’s finally rolling out with Google Pay. All your purchases, passes, and payment methods will now be under one app, both for offline and online purchases. However, what they’re rolling out now isn’t the complete product yet so expect updates and new features to arrive soon. They’re also looking to expand to other devices and services as well, but that’s all in the near future.

What we do have now is a Home tab in the app where you can see all the purchases that you’ve made through Google Pay as well as nearby stores in case you need to buy some important things but don’t know where to get them. You also get easy access to your connected reward cards as well as tips on how you’ll be able to get discounts and save up your money. Of course you will also see all the cards and payment methods that you’ve connected to your account.

All the things that you enjoyed with Android Pay are also here, including secure payments, your bank’s perks and protection, and also paying for your online purchases without having to fill up all those forms. You can also use Google Pay for transit payments in Kiev, London, and Portland, plus more countries and cities will be added soon. Basically, for Android Pay users, nothing will change except the name plus more added features.

While they’re already rolling out Google Pay, a lot of the promised new features are still not here, including peer to peer payments. They did promise that users in the US and UK will get this in the next few months. But in the meantime, you can still use the now renamed Google Pay Send (formerly Wallet). They are also working on incorporating Google Pay with Chrome and Google Assistant, but that will probably be further down the road.