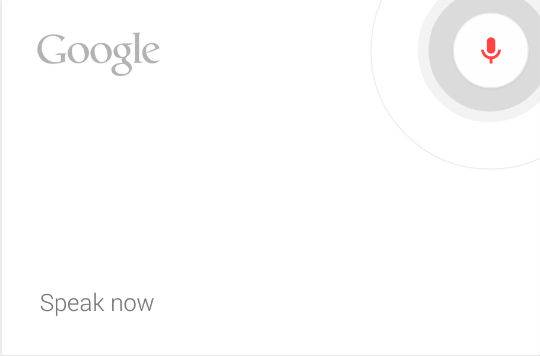 With the update to Google Search and Google Now, one thing went under the radar. We know about the new cards, which is great, but Google Now also got a little more conversational. As a few people have noticed, Google now asks for additional information when needed.

We first saw this kind of thing at Google I/O, in a demonstration of Google Voice search. In that demonstration, Google could understand context that went unsaid. If you were to ask where the Emprire State building was, then ask “how far is Yankee Stadium from there?”, Google would understand where there was, leaving you in contextual heaven.

With the Google Now update, voice activation not only gets a contextual understanding of where you are or what you mean, it also asks for additional info like where you want a message sent. Ron Amadeo at Ars Technica cleverly pointed out that when asking to send a text message, Google Now asked who he wanted to send it to, and then asked what he wanted the message to say. It then offered to let him see his message, and send it along; no buttons pushed.

Kevin Toffel of GigaOM has tested the functionality on a Nexus 10 to make sure it wasn’t an Android 4.4 thing, as Ron tested it on a Nexus 5. While not widely available yet, Kevin notes it worked just fine on a legacy Nexus device. His Nexus 10 was running Android 4.3, so we’re at least confident that Nexus owners will see the functionality soon.