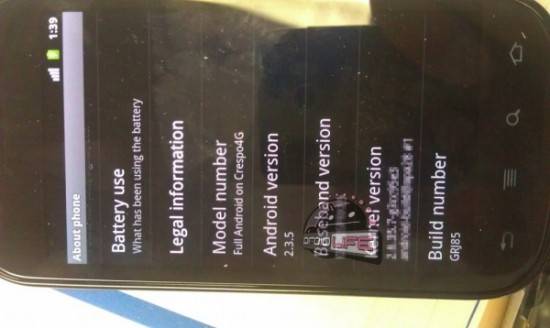 Recently we have been reporting that the Google Nexus S will soon receive an OTA update. Apparently the build will be version GRJ90 and new bits of information are claiming that the Nexus S may in fact be upgraded to Android 2.3.5 as well. Some of the features include NFC Support, 4G widgets, and bug fixes.

One reason that this may in fact be Android 2.3.5 is the update will bring support for the NFC Secure Element that is needed for Google Wallet. Our friend over at Droid-Life had a tipster send him the above image and even though the build number is older than what we are expecting (GRJ85) it could be an earlier version for development purposes.

Although if anyone has messed around with Android in the past all it takes is a rooted phone and something like Root Explorer and you can easily edit the build.prop to show any build number or android version you’d like. I once made mine Android 4.0 just for kicks, so this news could very well be what is coming soon but I’ll take it with a grain of salt for now.