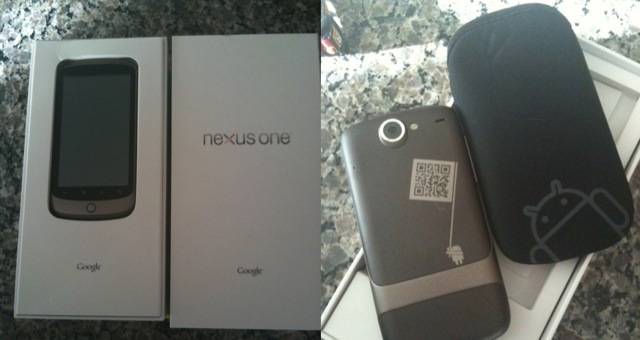 More sightings of the Google Nexus One Phone keep on making its way to twitter, no doubt twitter has become an interesting source of this kind of news. Apparently, someone did an unboxing of the Nexus One and has the pictures to support that claim.

The Google Nexus One Phone running Android 2.1 was peacefully having a coffee at Starbucks last time we heard from it. This time it shows up with its packaging and more photos. One of those pictures of this Android phone shows the back with the battery cover removed, as you can see on the gallery below, and it has a HTC-made battery.

Now, is not like nobody suspected of the Nexus One been a HTC phone, but there wasn’t any official confirmation to go by. Well, thanks to this images, you now know; the famous Google Nexus One Phone is HTC-made. Will it be branded as “The Google Phone”? We do not know, and Google is mum about it, but it is expected to arrive in 2010. And it will arrive to at least one US carrier and unlocked directly from Google themselves.

As you can see on one of the pictures below, there is the QR 2D barcode (which had previously been covered up in tape) on the back of the Nexus One. Our good friends over at SlashGear scanned that barcode, and they found it resolves to android.com/holidays, which unfortunately, is not working right now, it simply takes you to the Android webpage.