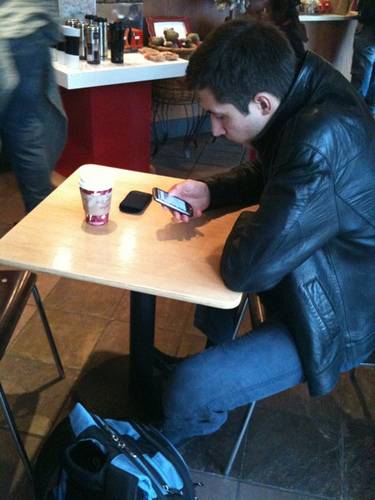 So more news keep on trickling down about the already famous Google Nexus One smartphone. It feels like rumors, sightings and people playing with the device will keep on coming, and we all are in for the ride, no matter what. After all, we all want to find out more about this new Android device, right?

Paul O’Brien, founder of MoDaCo, has posted on his twitter account that he has “inside info” on a January 5th 2010 release for the Google Nexus One. Not only that but he is also claiming that the Nexus One will be release across the pond; in Europe. O’Brien does not say anything about the price, but he says that “it’ll be very competitively priced” but unfortunately for many, the Android 2.1 device will not be available for preorder.

Well, enough of that, let’s get to the most important thing; the sightings. Not that finding out about a release is not important, but really, O’Brien’s claims are not enough proof, but the picture above is. Nick Starr claims on his twitter account that there were two people behind him in line at a Safeway with Nexus One phones each. He even claims that he played with one for a second, and the phone is “way thin and cute.” A few minutes later, this time inside a Starbucks on Church/Market, he caught on camera his second Nexus One phone sighting.

What do you think folks? All this twitter and frequent sightings of the Google Nexus One seem to give us more confidence that this new Android device will be hitting the shelves pretty soon. Are you planning to get one?