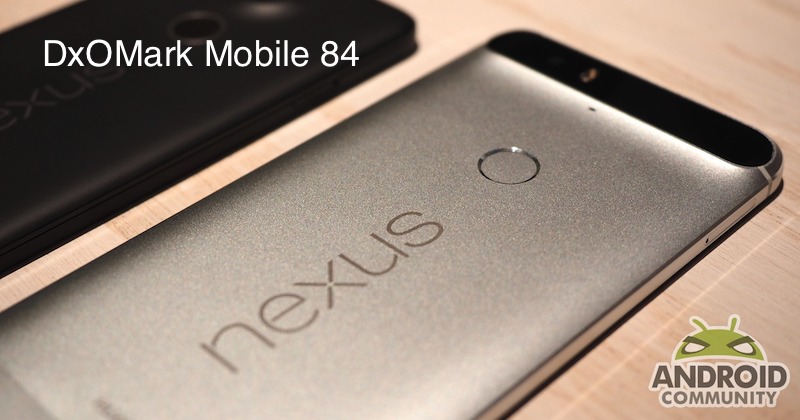 Providing reliable hardware ratings, DxOMark continues to give us an idea how a new mobile device performs compared to other models from other manufacturers. The latest Huawei Nexus 6P, one of the two Nexus device revealed yesterday by Google, has just been reviewed and rated with a Mobile Overall Score of 84.

The Nexus 6P is the first Nexus made by Huawei. It’s also the first from a Chinese phone manufacturer so you can say it’s really special. It’s bigger than the LG Nexus 5X and comes with better specs: 5.7-inch AMOLED screen, 1440 x 2560 pixel resolution, Corning Gorilla Glass 4 protection, 12.3MP rear camera with a 1/2.3-inch-type sensor, 8MP front-facing camera, and 2160p video recording capability at 30fps. Other imaging features include a built-in picture editor, face detection, GEO tagging, laser autofocus, stabilization, HDR+, and LED flash.  The Nexus 6P is offered in three storage options: 32GB, 64GB, or 128GB. The latter is biggest yet in a smartphone.

The Google Nexus 6P’s DxOMark Mobile Photo is 86. According to DxOMark, the smartphone is the best phone they’ve tested so far with impressive detail preservation even in low light conditions. In all outdoor conditions, detail preservation, color rendering, and white balance are good. In all conditions, phone boasts of accuracy and fast autofocus.

Unfortunately, when HDR+ is activated, you may notice some irregularities in noise, texture, color, and exposure. Sometimes, highlights of the images are blown out especially in high dynamic scenes. Another downside is that when triggered, an image can be take before autofocus has converged.

Meanwhile, DxOMark Mobile Video score is 79. The Nexus 6P’s video cam offers good color rendering, white balance, and global exposure while autofocus is still accurate and fast. Noise level is low in all conditions. As for the cons, videos may be bad during motion scenes, no thanks to stabilization’s strong jello effect. When tracking, focus may be lost and refocus may be visible. Some details can also be lost and color shading may be visible in low light conditions.

We’ve got our hands-on on the smartphone but we have yet to do our own review so we don’t know how the Nexus 6P’s photos and videos will come out. For now, here are are some sample photos from Google’s Android team:

The DxOMark team said the Huawei Nexus 6P is a “serious contender for mobile photography”. Placing it behind the Samsung Galaxy S6 Edge and ahead of the recently reviewed LG G4, it makes the new Nexus phone a great choice if you’re on the lookout for a new mobile phone with great camera.