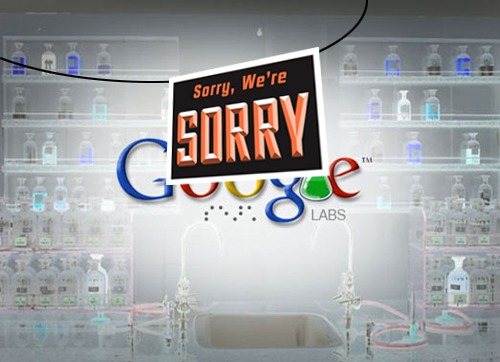 It was the worst day in the history of the world this Wedesday, today if you’re reading this post on the correct day, when Google announced that they’d be closing their Google Labs department. For some this was a sign of imminent doom because they’d been experimenting right alongside Google Labs since before GMail. But for others, no change would be happening. Which are you? Let’s have a talk and see, shall we?

In the post I’ve just posted over on our sister site SlashGear, you’ll find the truth to be sort of self-evident: Google Labs is much more of an idea than it is an actual department. While the team at Google Labs did create such gems as Google Goggles and Google Reader, they’re certainly not going to be fired as a unit now that the Google Labs name is being dissipated. Just the opposite, in fact, as Google Labs will now be rolled into different departments so the group can collectively become more focused on future projects.

In the original post made by Bill Coughran, SVP for Research and Systems Infrastructure, notes that there are “extraordinary opportunities ahead” and that closing Google Labs is necessary for greater focus. He also notes that speed and innovation, the two driving forces behind Google Labs, will continue, as is evident in the thus far massive success of Google Plus. Whether or not this has anything to do with the fact that the Galaxy S II is getting closer to the USA by the day and they just couldn’t handle the immense power approaching is still to be seen.