Google announced the Hangouts app yesterday during the I/O keynote and while the app appears to be feature rich, one particular feature did seem to have been left out. That feature is SMS integration, which while not supported at the moment — was one of the permissions.

Anyway, Dori Storbeck, who is the Community Manager for Hangouts and Chat has since confirmed the support will be coming. We have yet to see a date, or even a narrowed down timeframe, however Dori did say “SMS integration is coming soon.” Furthermore, it was said that has been one of the most requested features. 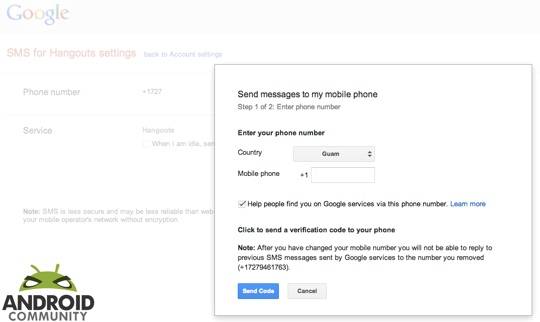 That confirmation should be enough for most, however there is also some evidence of the SMS support in the Google Accounts settings. If you visit the settings page at www.google.com/settings/account you will find an option for “SMS for Hangouts.” This is described as being the place to “add your phone number to receive messages from Google+ Hangouts as SMS, when you are idle.”

The interesting (and slightly annoying) part will come for those who attempt to set this up. If you click the edit settings option and then the edit button you can begin to set things up, however the country list will be lacking for some and therefor stops you from completing the process.