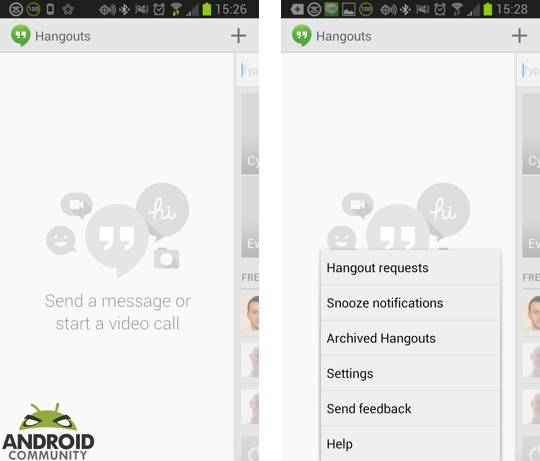 Google+ Hangouts were announced earlier this morning during the keynote. At that time Google had said this would be arriving today and true to that statement, the app has since come available in the Google Play Store. The app has arrived as Hangouts and it will replace the Talk app already installed on your device. As we saw earlier, Hangouts is a cross-platform messaging app and allows for text and video chatting.

The app launches to the main screen where you can click the + icon in the upper right hand corner. This is where you will begin any conversations. Once clicked you will see the New Hangout screen which allows you to start a hangout by typing a name, email, number or circle.

Once in a conversation the process is about as simple as could be — you have your text and video and the flow and process should be familiar for those who were previously using the Talk app. Or for that matter, other video calling apps. From the menu you have access to your Hangout requests as well as any snoozed notifications and archived hangouts.

Overall the app is smooth and easy to use. For example, while in the archived hangouts section you can simply swipe to remove any conversations that you no longer want or need listed. The app also has plenty of options in terms of emoji and will allow for you to send images by using one from the gallery or by taking a new one using the camera.

Otherwise, as was expected the notifications will stay in sync across devices, any conversation can be turned into a hangout with up to 10 people, you can use this with friends on other platforms (such as iOS or the web) and you can send text messages at any time — even if that friend isn’t online a the moment. Finally, one change from Google Talk, Hangouts does not allow you to set your status as “invisible.”