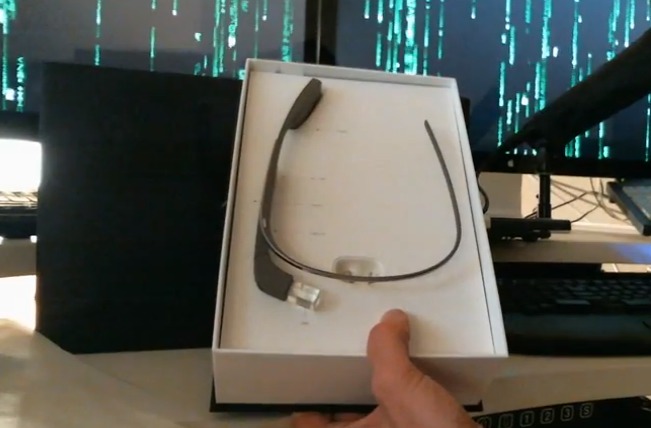 Earlier this week Google told us that their prized Project Glass would finally become a reality for those who pre-ordered last year at Google I/O. Stating that Google Glass was being pulled off the production floor and headed to a few lucky developers. While we patiently await ours to arrive, check out the first ever Google Glass unboxing video below, and even some video of glass recording Go Kart racing. It’s pretty epic!

Multiple lucky developers over on Google+ are blasting their pages full of details, which leads us to believe the NDA to keep details quiet isn’t as strict as we thought it would be. Within 24 hours of confirming they’ve started shipping glass, we are already seeing multiple pictures and videos surface. I just want mine nowwww!

Thanks to one lucky developer to get the Explorer edition early, Dan Mclaughlin we have a few unboxing videos available. The one below is his official unboxing but it isn’t the best of quality thanks to an awful webcam – a smartphone could have done better. He later uploads an unboxing of Glass, through Glass. Showing the box and contents for those interested. It’s pretty neat so take a peek.

Yesterday Google revealed all the specs for Glass Explorer edition units, so now all we need is these to get into the hands of more consumers and developers. As we mentioned above we also have one more awesome video. This shows Google Glass recording a nice little Go Kart racing session, and it looks pretty amazing. You do however see the user reposition Glass a few times, as if it isn’t very secure to his face. Either way I want one, what about you guys?

Pretty neat stuff. There’s also a few screenshots floating around of navigation directions being sent from the Nexus 4 to Glass and more so stay tuned as we continue to get more details over the next few days. It’s going to be an exciting few weeks until Google I/O arrives.