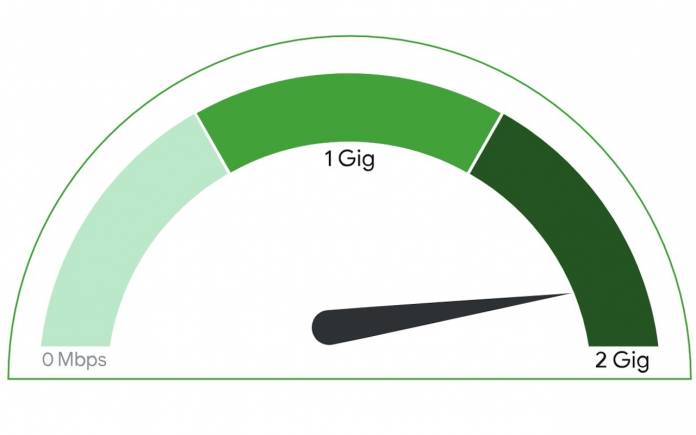 More good news for subscribers of Google Fiber–more speed is coming your way. It’s been over seven years since Google acquired Provo’s Fiber network and introduced Google Fiber. The tech giant’s home Internet service has been expanding to several cities and towns in the United States over the years from Utah to Texas, Kansas, Missouri, Oklahoma, Florida, and just recently, in West Des Moines, Iowa. The Google Fiber team has been busy working on more installations in more cities while making the highspeed wireless broadband service even faster.

By faster we mean up a whole gigabit. From 1 Gigabit, the Google Fiber speed will soon be 2 Gig in select cities. That’s 2 gigabits of download and up to 1 gigabit of upload. We can’t imagine how fast that is but we know in some places around the world, it’s impossible to reach.

The 2 Gig offering also means faster Internet connection with a Wi-Fi 6 router and a mesh extender. More devices usually mean the bandwidth will slow down but not with Google Fiber.

Google Fiber promises no dead zones, no congestion, and no interruptions with Wi-Fi. We believe this is possible because 1 Gig is already fast enough. Now we just want more cities to be covered by Google Fiber. After West Des Moines, Iowa, where will the next expansion be, Google?

As for the price, Google Fiber with 2 Gig is only $100 a month. That’s only $30 more than the price of the 1 Gig service. The offer will only be available initially for Huntsville, Alabama and Nashville, Tennessee. Google is set to start the testing period soon. Sign-up for the Trusted Tester Program if you’re interested.