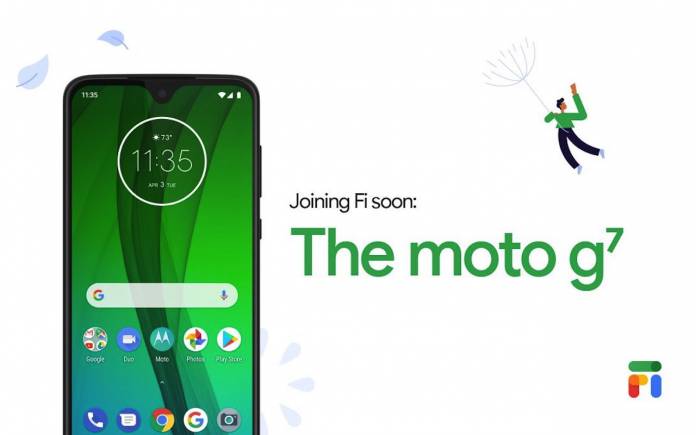 The Moto G7 is joining the Google Fi squad. We mentioned this earlier when Motorola officially announced all-new addition to the Moto G family. The Google Fi team has teased the good news so expect related reports will also be revealed by Motorola or any other mobile carriers in the US, European, and Latin American kay markets. The Moto G7, Moto G7 Play, Moto G7 Plus, and Moto G7 are now available in Brazil and Mexico at affordable prices so expect other countries to receive them soon.

The Moto G7 from Google Fi (formerly Project Fi) is something to be excited about especially if you’re a loyal Motorola fan. We’re not sure if the other variants will be available on the network but the Moto G7 may be enough.

Motorola’s new Moto G7 comes equipped with a big 6.2-inch Max Vision screen with Full HD+ resolution. It’s faster by 50% than the Moto G6 as made possible by the Qualcomm Snapdragon 632 processor.

The camera system includes two 12MP sensors with Google Lens. Other imaging features include blur effects, Spot Color, and Auto Smile Capture. There’s an all-day battery plus TurboPower charging tech so there is no reason for the smartphone to go low-batt.

Coming to the Fi fam soon: The moto g⁷ ?

The Moto G7 is described as a nice addition to the current lineup. Let’s wait and see for further announcement from Google Fi.