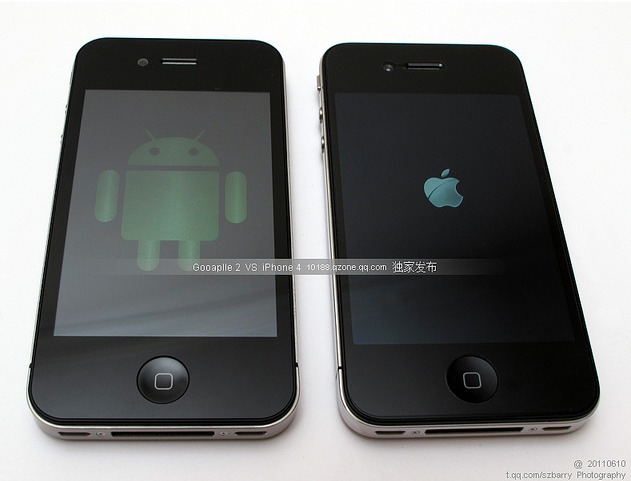 Oh China, you so crazy. You’ve got infinite knockoffs of excellent devices, and most of the time, that is most of the time as in 99.999% of the time your knockoffs are terrible. But once in a great while there’s a diamond in the rough. Here it is, how convenient! The folks at brand-name GooApple have created an iPhone 4 knockoff so real, you’ll flip your lid. And what’s this, it’s running iOS 4 as well? Actually no, not at all. Inside you’ll find all the Android you can handle, in a perfectly simulated iOS environment. Experience the Apple device with Android in it and Android printed on the back with an Apple inside him. It’s the knockoff of everyone’s dreams!

The device you’re about to see in the video below is called GooApple 3G, and it’s rolling out looking like a twin sister of the current model iPhone 4. This device runs with a 3.5-inch capacitive display, 3D connectivity along WCDMA, has Wi-Fi connectivity, GPS, a 5-megapixel rear-facing camera, runs on some sort of Qualcomm CPU (more than likely 600 Mhz,) and is exactly the same thickness as the iPhone 4 at 9.3mm. The frame that surrounds this masterpiece is stainless steel and the glass that sits on either side of the device is glossy aluminosilicate – hardcore! This device has stereo speakers, has the ability to act as a Wi-Fi hotspot, works with USB and Bluetooth tethering, and is running Android 2.2 FroYo!

Sadly, this device only supports full-sized SIM cards and more than likely will just HATE your American cellular bands. On the plus side, you’re probably not going to have to mess with activating the device or anything like that, so feel free to use it as an iPod Touch, if you know what I mean. The cost of this device is right around 1700 yuan (about $262) if you know where to buy it. It’s nowhere near my birthday this time of year, but if you were thinking of getting me a Secret Summer Santa gift, you not know what I want. Weird!

Would you consider purchasing such a device just for the fun of it? Clearly it’s meant to both fool the foolish and make the lovers of both Android and iOS happy on the other hand – if you’re one of those sorts of people, how enticing does this look? Should you end up getting one somehow or another, be wary – the Apple Police are many and they are hyper intelligent in their means of grabbing you in the night, and this knockoff is pretty blatant. Mind your hiding!