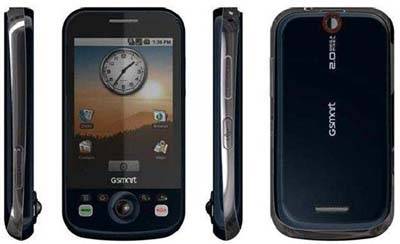 Last week we told you that Gigabyte Technology and AboCom Systems were negotiating with Vibo Telecom to produce an Android-based smartphone. Apparently they already have one ready to be release on the Russian market as early as next month.

As we mentioned before, Gigabyte Technology has been successful with their GSmart series running Windows Mobile, but now they – as many other manufacturers – want to jump on the Android bandwagon. Their first Android-powered phone doesn’t have a name yet, but as you can see on the image above, it will be one of the GSmart series handsets.

According to Mobile-review, the new handset runs Android 1.6, measures 103 x 54 x 13.4 millimeters, and it comes with a trackball, G-Sensor, and 3.5 mm audio jack. The price is rumored to be around 9000 rubles (€214 or $303) which isn’t bad, unfortunately the device comes with such a small display compared to other Android handsets in the market.