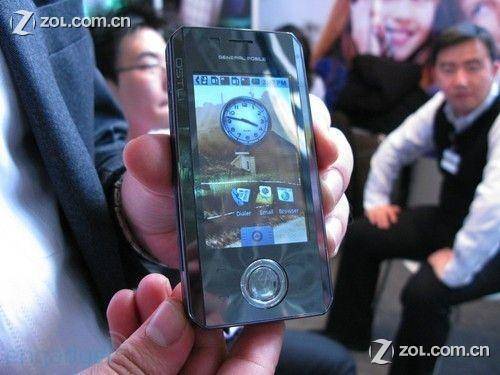 It’s not all announcements regarding long-off devices at Computex 2009: General Mobile have brought along a working prototype of their DSTL1 Android smartphone.  Snapped by Zol.com.cn, the DSTL1 has a 5-megapixel camera, 3-inch touchscreen and 4GB of onboard storage.

Under the particularly glossy hood there’s a 624MHz processor that, last we heard, was a Marvell PXA 310 chip.  No word on whether General Mobile have left the rather disappointing GSM/EDGE only connectivity (there’s WiFi b/g but no 3G) but the dual SIM slots are still there.

General Mobile are yet to give a solid release date, and there’s no telling whether the DSTL1 will even make it to Europe and the US.  Their original estimate suggested a Q3 2009 launch, with no indication of pricing.