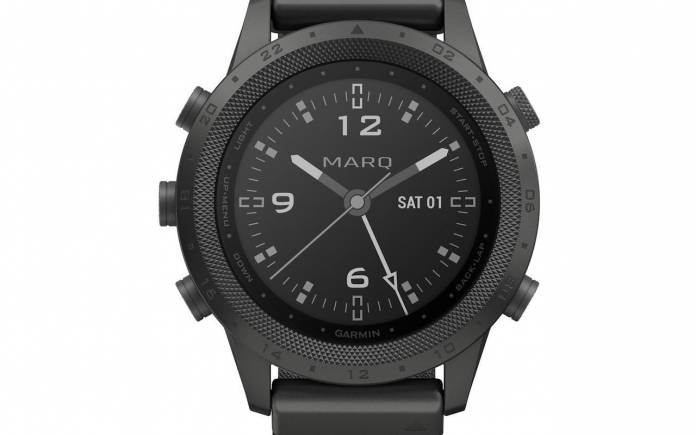 Garmin is almost synonymous with GPS but the brand has since evolved into making other wearables. They are mainly health and fitness trackers. There are more expensive versions but there are also affordable models. Earlier this year, Garmin has come up with a line of premium smartwatches. Officially called the MARQ series, it is considered more of a luxury line offering more advanced specs and features. Five models were introduced previously: the MARQ Athlete, MARQ Aviator, MARQ Captain, MARQ Driver, and MARQ Expedition.

Those early MARQ smartwatches are getting a follow-up in the form of the MARQ Commander. The ‘Commander’ in the name evokes a sense of ruggedness but this one is still a luxury item. It’s described as a luxury modern tool watch with tactical functionals and built-in topographical maps.

They sound like big words but they’re mainly for special functions. To be honest, even without those features, the matte design alone will make people buy the Garmin MARQ Commander. The tritone jacquard-weave strap is complemented by a domed sapphire lens.

The smartwatch comes with an always-on display. It’s compatible with night vision goggles. The new MARQ watch is a beautiful timepiece that delivers a premium look and yet maintains a rugged and solid feel.

It can work as an ordinary GPS watch but you can choose to disable wireless communication and connectivity or stop sharing your position. Switch the watch to stealth mode if you don’t want to record or share data. Other features of the Garmin MARQ Commander smartwatch are as follows: advanced navigation features, topographic mapping, barometric altimeter, compass, multiple Global Navigation Satellite Systems, unique dual-position mode, Jumpmaster, waypoint projection, and tactical activity profiles,

Other features include a unique dual-position mode, which simultaneously displays two sets of coordinate systems on a single data screen, Jumpmaster, tactical activity profiles, and waypoint projection. Expect that standard Garmin Pay, smart notifications, wrist-based heart rate and pulse ox3 sensor, and daily activity tracking. Pricing is set at $1,950 and ready to be purchased at www.garmin.com/marq.