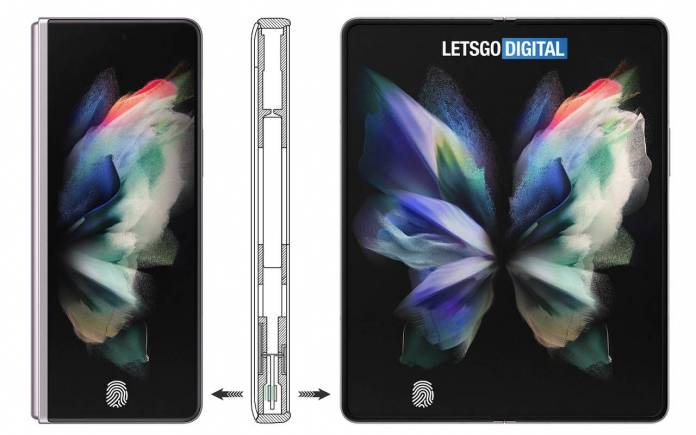 This is the first time we are mentioning the Samsung Galaxy Z Fold 4. Well, it may be too early to begin speculations and pass around details but as you know in the mobile market–it is never too early. It’s not especially if the subject is a premium flagship smartphone from Samsung. The Galaxy Z Fold 3 and the Galaxy Z Flip 3 have just been revealed. They haven’t even reached some of the key markets but here we are sharing with you concept images of the next-gen foldable Android phone.

Trust our source to be ahead of the competition. Sometimes, it’s just fun to imagine and design new devices. The Galaxy Z Fold 3 is currently doing well so it can be assumed a fourth-gen will still be planned.

A Samsung Galaxy Z Fold 4 is highly possible. Samsung has just started and the brand doesn’t really have a worthy rival–yet. About a million Galaxy Z Flip 3 and Galaxy Z Fold 3 have been sold already and that’s only in South Korea.

Between the two, the Galaxy Z Flip 3 is more popular but the Galaxy Z Fold 3 is the more advanced smartphone. It has a number of advanced features including an under-display camera. It doesn’t have an in-display fingerprint sensor but the next-gen version could have this feature.

It makes sense and we believe it can happen. Samsung was able to make the flexible display be compatible with an S-Pen. Perhaps next year, the under display fingerprint scanner will be possible.

The patent shows us another interesting detail. The in-display fingerprint sensor may be used via the main screen and the cover display. This could mean it can work when opened or folded. It’s also possible it will be a double-sided fingerprint sensor but we’re not sure how it will happen.