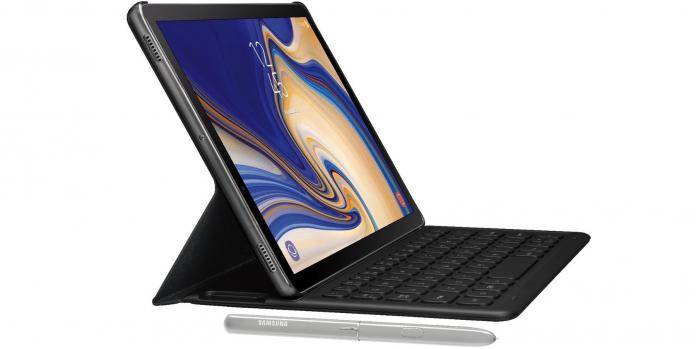 We’re just waiting for the official announcement of the Galaxy Tab S4. We’ve heard of this model ever since the specs were sighted on GFXBench last February. It was soon WiFi certified, already compared to the Tab S3, and were noted to receive two updates. We saw the renders and thought it looked familiar. Much has been said about the upcoming Galaxy tablet but now we’re hearing there will be a few more small changes. Looks like the device will now arrive with an optional keyboard cover, in white, and aside from coming with a redesigned S Pen.

By redesigned S Pen we’re assuming it will be the same as with the Note 9 S Pen. That one will have Bluetooth connectivity which means it can work with other Bluetooth-enabled products.

Master Leakster Evan Blass aka @evleaks on Twitter shared three images that give us a glimpse of the Samsung Galaxy Tab S4. It looks pristine in white color and appears to be very professional and premium with the partner stylus. There’s the ‘Tuned by AKG’ label at the back so you know it offers an impressive audio quality experience.

The Galaxy Tab S4’s keyboard cover is only optional but we think it’s something you would want to get for yourself. Instead of buying a protective cover from a third-party accessory maker, we suggest you get this one from Samsung. It’s nothing really special though. Like most tablet covers we know, it props up the tablet for a more comfortable viewing. The physical keyboard allows you to work conveniently when you need to type and be more productive. The cover actually looks like any other previous covers from the South Korean tech giant.

See the S Pen? It is safe to assume this is how the new S Pen will look:

We’re expecting a wider stylus based on previous leaks. The image presented by Evan Blass further proves the early rumors. The design could also mean there will be a battery inside.

The Samsung Galaxy Tab S4 looks like a slimmer and taller tablet. We don’t have confirmation on the dimensions but the aspect ratio won’t be 18:9. It will be 16:10 as with the original Galaxy Tab S model. Tablet isn’t bezel-less yet but bezels are definitely smaller. We don’t see a fingerprint on the near nor a home button or a Samsung logo at the front.

Samsung will release a basic WiFi model plus a 4G LTE version in different RAM and storage variants. As for colors, we can only think of Black and White.