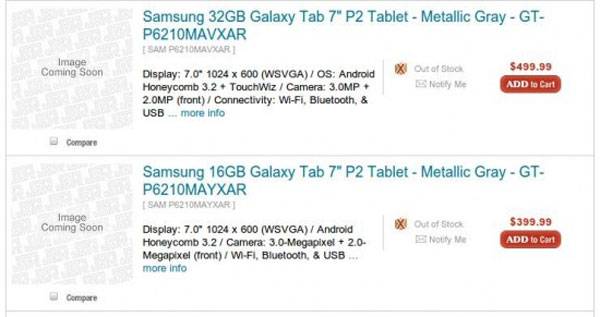 If you looked at the Samsung Galaxy Tab 7.0 Plus that was unveiled last week and thought the tablet might be for you if the price is good you weren’t alone. Samsung offered us all the specs the tablet has inside, but left us hanging on pricing for the new Tab. The 7.0 Plus has now turned up at J&R for pre-order according to Galaxytablife and the price is not bad at all.

The 16GB storage version of the Tab Plus is priced at $399.99 and the 32GB version is priced at $499.99. Both of the tablets are the same other than the storage capacity. Both have a 7-inch 1024 x 600 resolution screen. They also both have HSPA+ internet connectivity. The rear camera is a 3MP unit and the front is a 2MP unit.

The processor used is a 1.2GHz dual-core and the tablet has 1GB of RAM. Both run Honeycomb and have the TouchWiz interface over the top. The price isn’t bad and the only thing we don’t know right now is exactly when these pre-order tablets will ship.