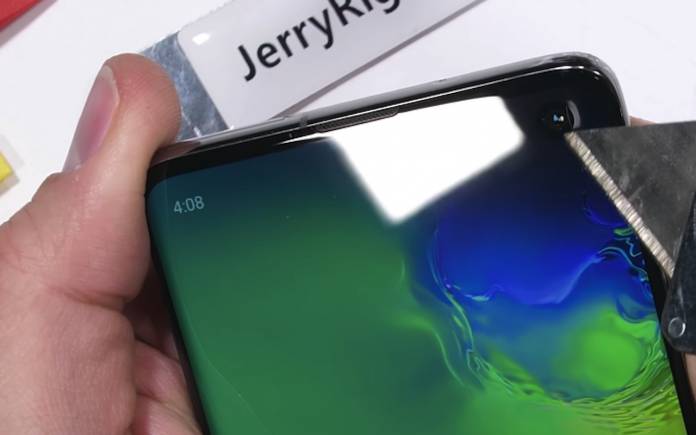 The Samsung Galaxy 10 series is definitely one of the highly anticipated phone this year. There are three variants that must be reviewed and tested for durability–the Galaxy S10e, Galaxy S10, and the Galaxy S10+–although one is enough. Zack Nelson has finally spent some time on the S10 phone which basically has the same build and design as the Galaxy S10+, only the Plus variant is bigger. It’s expected that JerryRigEverything will take one model and test its durability by the standard Scratch, Burn, and Bend Tests.

As usual, this exercise starts with scratching the screen. The initial step is to check if the screen protector works as Samsung has pre-installed a very thin protector. It is then removed for further testing.

A premium screen usually scratches at level six with a deeper groove at level 7 and it is no different with the Samsung Galaxy S10. The South Korean tech giant has used aluminum for the sides so they scratch with an annoying screeching sound. (Warning: Don’t watch the video below with your earphones.)

The earpiece grille is metal so it won’t fall off. The Infinity-O display doesn’t scratch so it’s safe. As for the in-display fingerprint sensor, light scratches doesn’t affect the scanning function. Unfortunately, deeper scratches have been done resulting in the sensor being damaged. It no longer works as intended, sadly.

It takes the display about 30 seconds under heat before it turns into white, still recovering as expected. As for the bend test, it doesn’t do any damage because Samsung Galaxy S phones are always known for their well-designed and well-constructed build.