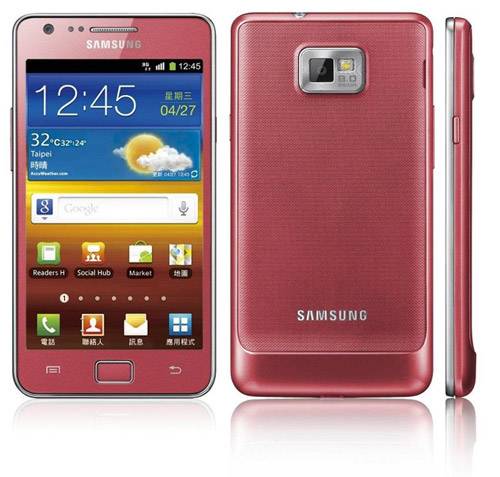 Pink phones have gone out of the mainstream here in the US, at least as far as iPhones are concerned. Don’t worry, you can still cover your iPhone in as much pink leather and “real” Swarovski crystals as you’d like at half a dozen carts at you local mall – you too, ladies. But as far as actual phones go, you’re pretty much restricted to white or black these days. But if you live in Taiwan, you’ve got a new option if you like the Galaxy S II as much as we do: Samsung has released the pink version of the international phone in the market.

This is probably the same phone released in South Korea back in November 2011, which retailed for a little over $700 USD in local currency. In Taiwan you can now pick it up for TWD$21,900, which works out to be about the same. There’s nothing changed about the phone internally – you still get a 1.2Ghz dual-core processor, a gig of RAM and 16GB of storage space, and an 8MP camera with Gingerbread and TouchWiz filling out the software bits. Obviously the new model will have some linguistic changes for the Taiwanese market, but that’s about it – oh, what I wouldn’t give for an unlocked phone economy in the US!

That makes just two markets that have access to the ubiquitous Galaxy S II in a more feminine shade, one of them being Samsung’s home country. You might see more countries get the pink GSII as the smartphone (gracefully) ages, especially with the Galaxy S III expected in the first half of 2012. Remember fellas, there’s nothing wrong with having a pink phone… but you might want to draw the line at the Hello Kitty game shortcut on your home screen. You wouldn’t want anyone to get the wrong idea.