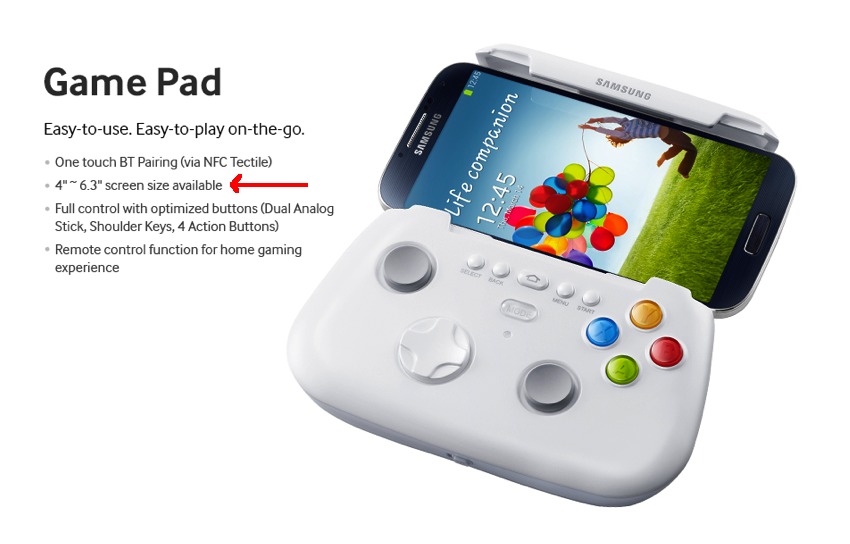 Yesterday was all about Samsung‘s latest and greatest smartphone the GALAXY S4, but that wasn’t the only interesting device they revealed yesterday. Samsung also has a GamePad in the works to take on NVIDIA’s Shield and many others. Like many of you we are already looking forward to the “Next Big Thing” from Samsung. That of course being the much rumored Galaxy Note III smartphone tablet hybrid. So how do those two come together? Read on to find out.

It looks like Samsung’s GamePad is a work in progress, and like the MOGA Game Controller will use Bluetooth for a connection and simply holds your smartphone in place. You’ll use NFC TecTiles for easy Bluetooth pairing, and will be gaming with true Xbox style controls in no time flat. With shoulder triggers, 4 action buttons, and dual-analog sticks for some fun gaming. However, their landing page might of revealed more than intended.

We’ve heard conflicting reports regarding Samsung’s upcoming Galaxy Note III, which still hasn’t even been confirmed. Original leaks suggested a massive 6.3-inch 1080p screen that would take the phablet market by storm, but recently we’ve also been hearing 5.9-inches for the Note III. However, today it looks like Samsung might have inadvertently leaked the details.

As you can see in their official image above, the Samsung GamePad Controller will support screen sizes from 4 all the way to 6.3-inches in size. Pretty specific if you ask us. This could just be a coincidence, but it looks like their GamePad is coming soon, and it will probably be followed with an announcement of the Galaxy Note III complete with a 6.3-inch display. Rumors have the Note III slated for a late August reveal, so stay tuned for more details.