The amount of tips, leaks, and rumors surrounding Samsung’s upcoming 5.68-inch phablet aren’t slowing down. This week alone multiple different release dates have purportedly been leaked. However, this afternoon some internal documents shown by Engadget from Three UK show the Samsung Galaxy Note III hitting the shelves on September 16th.

Previous reports have the Note III becoming available on the 27th, and early rumors even suggested it would launch the week after it gets unveiled on September 4th. If that’s close to accurate, the 16th might actually be pretty close and our best bet.

However, these aren’t US release dates, and surely US carriers might change things a bit. Samsung’s been pretty good at getting universal launches as of late, and we’ll likely see it arrive in the US within the next month. Start getting excited about this 5.68-inch 3GB of RAM packing quad-core powerhouse smartphone, because it’s coming soon. Just this afternoon we saw our best look yet of the front fascia. 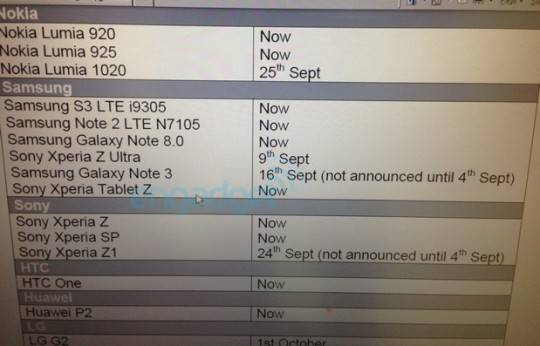 The leak you see above mentions more than just the Note III, and we’re also seeing another flagship device launch date. That being the Note III competitor from Sony, the Xperia Z1. Which is also known as the Honami. According to this leak the Note III arrives on the 16th, with Sony’s Xperia coming to the streets on the 24th. Hopefully launch dates and details are revealed next week at IFA, if not, we’ll be sure to keep you all updated the minute we know more.