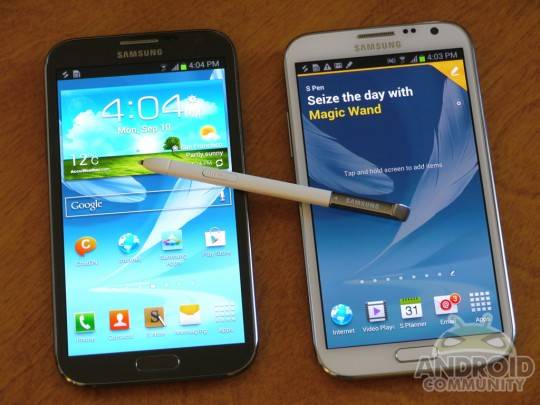 Great news folks! We know many of you have been hoping that the newly announced Samsung Galaxy Note II phablet would be available from your carrier, and today we have all the details. Just like the Galaxy S III, the Galaxy Note II will be launching on all major US carriers. That means Verizon, AT&T, T-Mobile, US Cellular, and the Now Network will all offer the 5.5-inch Jelly Bean powered smartphone.

This is pretty impressive. It looks like Samsung is getting to that point now where they can muscle carriers into accepting their awesome devices just how they come. The Galaxy S II was changed by each respective carrier — something I wasn’t a fan of — and when the Galaxy S III launched they made sure they maintained control.

The Galaxy Note II will be coming to all major US carriers in the exact same form factor and same specs as the international version we announced last month during IFA 2012. What is even more exciting is Samsung’s managed to keep their quad-core Exynos processor on board this time around too. That means Qualcomm’s S4 (from the GSIII) has been dropped and Samsung has managed 4G LTE radios into their own quad-core processor.

So for the specs, you’ll get the same 5.5-inch 1280 x 720p HD Super AMOLED display, a 1.6 GHz quad-core Samsung Exynos processor, 2GB of DDR RAM, 16GB storage, 8 megapixel rear and 1.9 MP front cameras and a massive 3,100 mAh battery for all day usage. Carriers with 4G LTE options will have that included while they keep the quad-core processor, and T-Mobile will be running with their HSPA+ network speeds.

Just like the international version this awesome device will indeed ship with Android 4.1 Jelly Bean, and you’ll have the latest and greatest from Google including Google Now voice search and that buttery smooth user interface. Samsung has announced the device will be available from ALL carriers by mid-November. This means we could see them launch before that on AT&T or Verizon, or whoever gets it released first. I’m banking on AT&T personally. Pricing and exact dates will be announced and released by their respective carriers. Stay tuned folks and check out our hands-on and additional coverage below.