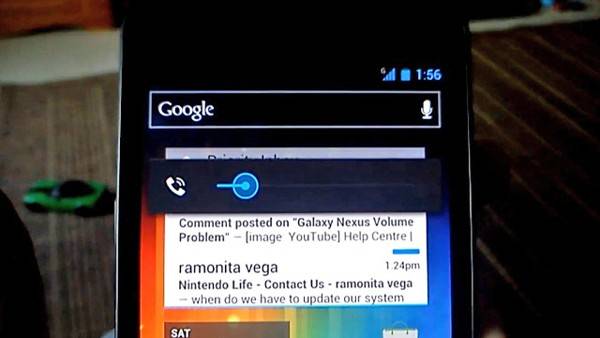 Into every life a little rain must fall. For European Galaxy Nexus owners, who are currently the envy of most of the Android world, that rain is coming in the form of some frustrating volume issues. Apparently some HSPA+ phones are randomly switching between volume and sound states, much to the consternation of users. According to a quick poll, about half of users are experiencing the issue, though our own UK editor has not.

It seems that some very specific parameters must be met for the volume issue to crop up. First, you’ve got to be using the 900MHz range of spectrum for your particular carrier. Next you need to be in a relatively weak signal area, causing the Galaxy Nexus’ radio to automatically boost itself. Regions with lots of switching between 2G and 3G networks seem to be hit the hardest. Check the video below for an example:

Of course, the nice thing about owning a Nexus device is that it’s likely to be updated very soon. Google is surely taking the performance of the international model seriously, even though there’s still no official word on a timeframe for the U.S. version. Expect some official word from Google soon, with a fix in the next software update, which probably isn’t too far out.