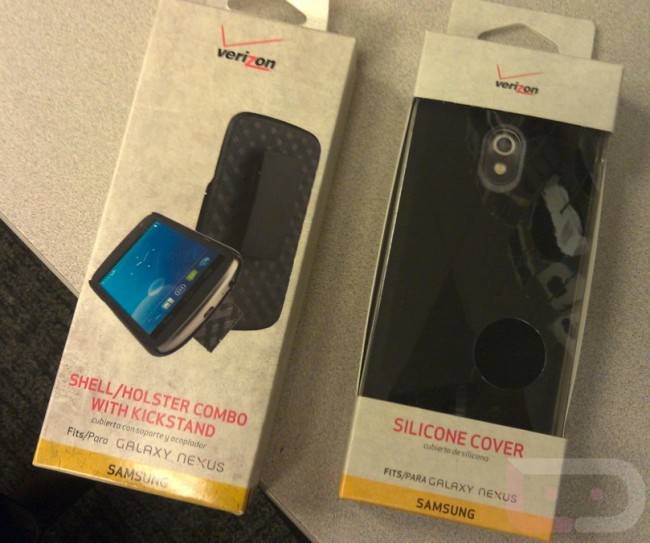 While everyone is still patiently waiting for some sort of official announcement from Verizon regarding the extremely popular Galaxy Nexus we are now starting to see some accessories for the Google hero device appearing at Verizon Wireless locations. I know many of our readers are getting a bit impatient and just want this phone already, but this is a good sign things are coming along smoothly.

The actual device release date on Verizon is still up in the air. We’ve seen rumors of a November 17th launch, but a recently leaked Verizon roadmap suggests the 21st is the big day. Either way with stores already starting to get cases and official accessories, the launch date can’t be too far away right?

In the image above we see an official Samsung silicon case, as well as a case kickstand combo accessory but that is all you get. Just a picture and that is all — leaving our minds to wander and hope for some good news. If the phone is indeed to come out around the 21st or the rumored black friday, we should be hearing something any day now from Verizon and Samsung. For now we’ll consider these official cases hitting stores early a good sign, but wont get too excited until we have some concrete details to share with everyone. This will be a big month for Verizon so stay tuned.

In case you’ve somehow missed it, we have some hands-on with the G-Nex and Ice Cream Sandwich so check those out below while we wait for this phone to hit the shelves.