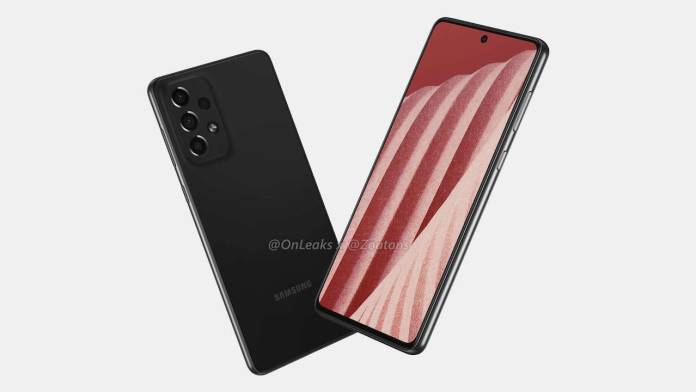 A couple of months ago, we noted the Samsung Galaxy A73 may use a different brand of OLED display. The new Galaxy A phone has not been revealed but we’ve got new information about the upcoming mid-ranger. The phone is expected to arrive with a large 6.7-inch flat display with an Infinity-O selfie camera plus an under display fingerprint sensor. It will also come with a quad rear camera system. Unfortunately, the 3.5mm headphone jack may no longer be available.

The Samsung Galaxy A73 is expected to launch this December. The Galaxy A series is ending the year with another affordable phone. The renders below were from our source who teamed up with Steve Hemmerstoffer aka OnLeaks.

The price could be Rs.32,999. This one is poised to compete with the Redmi Note 11 Pro and OnePlus 10 among others. The phone’s design is similar with the Galaxy A72. The large display will come with 1080 x 2400 pixel resolution.

Samsung will be using a Snapdragon 750G processor. The device will already run on 8 GB RAM + 128 GB ROM and Android 12 out of the box. The 108 MP quad rear camera will be powerful for its price point. The 5000mAh battery will be ready with 33W Fast Charging.

The phone will be out in either Black or Gold. It will measure 163.8 x 76.0 x 7.6mm (9.3mm camera bump). We’re only looking at a plastic build to keep the price down. The usual features like power lock button, volume rockers, USB Type C port, microphone, and speakers will also be present.