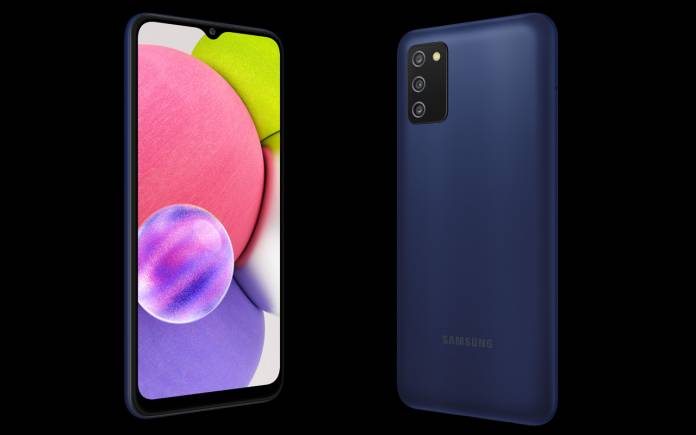 The midrange phone market is heating up lately; Xiaomi just launched the Redmi 10, which is expected peril into the Indian market and now Samsung is presenting a brand new option in its celebrated midrange A-series in the country. In that breath, Samsung has launched the Galaxy A03s in India. The budget-friendly smartphone doesn’t boast the kind of specs the Redmi 10 does – at a slightly higher price point – it still presents a subtle option for the takers.

The latest in the A-series, the Galaxy A03s comes with an impressive 6.5-inch Infinity-V TFT display featuring 720×1600 pixels resolution. This is accompanied by decent optics, which is spearheaded by a 13MP camera with f/2.2 lens.

The Galaxy A03s comes with a triple camera array on the back. Along with the 13MO main camera you’ll get – for the numbers – 2MP macro and 2MP depth sensors. An interesting bit lies on the front of the budget phone where you get a 5MP front camera that also has an f/2.2 aperture.

Even in midrange phones, the processor has become of real significance today. Samsung has the department covered with a MediaTek P35 processor. The matt textured Galaxy A03s is packed with a 5000mAh battery which takes care of the day’s playtime. Sadly there is no mention of fast charging for the phone.

As you’d want, the phone will run One UI 3.1 Core based on Android 11 right out of the box and the side-mounted fingerprint sensor ensures the bezel can be thinner on the chin. To be rolled out in black, blue and white colors the Galaxy A03s will be available in 3GB RAM with 32GB storage and 4GB RAM + 64GB internal storage options priced at 11,499 and 12,499 respectively.