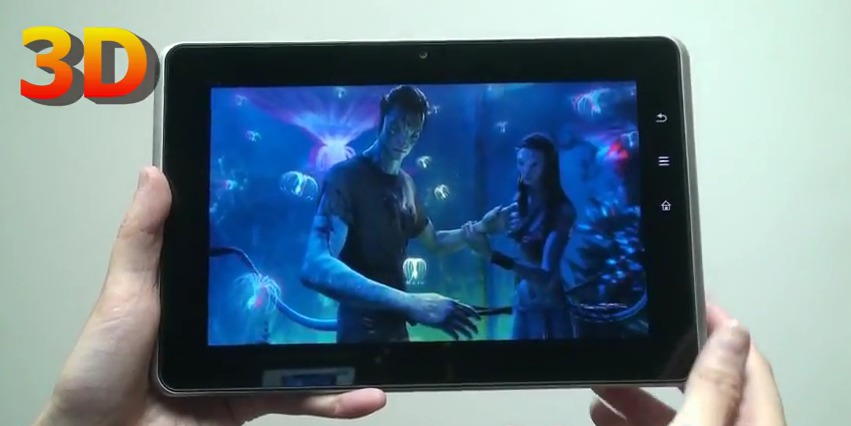 First off let me start by saying I’m still not really sold on this mobile 3D technology even though I did enjoy reviewing the HTC EVO 3D. What we have for you today is really interesting though because it has some impressive specs on a full HD 8″ 1280 x 800 resolution display all rocking glasses-free 3D. The downside is only Android 2.3 Gingerbread on board but I’m sure a few XDA developers could change that. Check out the full specs, pictures, and video below.

This tablet is being called the GADMEI T863-3D Tablet and it comes complete with an 8″ 1280 x 800 HD display that features full active 3D — glasses free. Being $199 I was worried about specs but this beast actually rocks a 1.0 GHz Cortex A9 processor and the powerful Mali 400 GPU for graphics and 3D rendering. With 8 GB of internal storage, micro-SD, HDMI-out, USB, WiFi and even a front facing camera for video chat. It also claims to offer a 5,000 mAh battery so that should last plenty long. I was expecting a cheaper device but with great internals, plenty of storage and a capacitive touch 3D display I’m actually a little curious and want one for myself.

Here is a video demonstration showing just how quick and easy it is to toggle regular 2D video viewing into full glasses-free 3D — just the touch of a button. They are showing it off using the impressive AVATAR 3D.

We don’t know much about GADMEI but they’ve made plenty of PMP’s and other tablet devices in the past so while this isn’t Samsung, I’ve heard the name enough to be familiar. On the other hand I’ve never heard of the online retailer but they did snap a few decent photos of the 3D tablet to give us a better idea of what to expect. Full details, specs, pricing and more is available at the source link below.