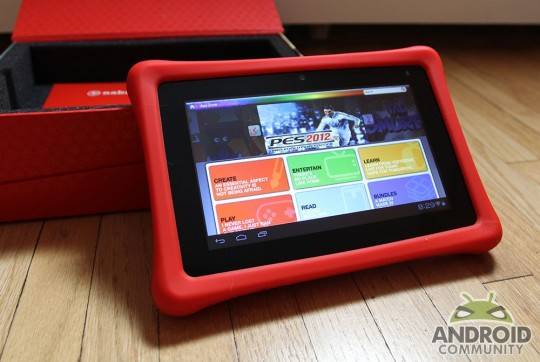 The Fuhu Nabi 2 tablet is on the way to stores, and it’s got your children square in its sights. It’s available for pre-order now from sites like Wal-Mart, GameStop, and Best Buy, with it scheduled to launch at Target on July 22. The tablet, which it targeted at tiny humans, also comes with a tiny price: $199.

$199 isn’t too bad for what you’ll be getting, as the Nabi 2 comes with Android 4.0 (Ice Cream Sandwich), a quad-core Tegra 3 processor, 8GB of storage with a microSD slot, a 7-inch touchscreen, a 2-megapixel camera that’s capable of capturing video in 720p, and a bumper case that will undoubtedly see a lot of use. Our pals over at SlashGear did a review of the Nabi 2 not too long ago, and even though the tablet will leave something to be desired for adults, children will probably get a lot of enjoyment out of it.

The Nabi 2 won’t be featuring any Google-certified apps, but it does come with a section of pre-loaded apps that your child will probably get a kick out of nonetheless. The apps are aimed at being both educational and fun, so if you hand your child a Nabi 2, you can do so knowing that they won’t be wasting their time with a bunch of apps and games that serve no purpose outside of entertainment.