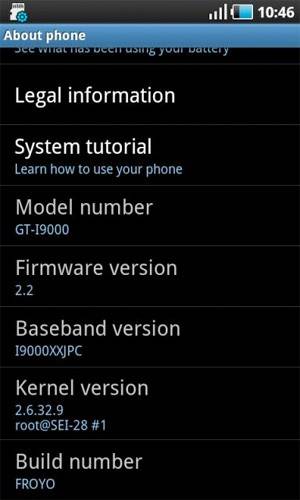 We know, there have been whisperings of 2.2 coming to the Galaxy S phones in the early fall, and now we have a screen shot that could bring some truth to that. It’s only a screen shot, but surely this is an early build that is being tested.

You will notice under the model number it says GT-I9000–that is model number for the Galaxy S phones, if you were not aware. So, this is a small leak but we are ecstatic to see anything that is involving Froyo on the Galaxy S phones. We are in hopes that some of the bugs that phones have had in, them (GPS Issues) will be taken care of in the update. In the mean time, try to be as patient as possible, early fall is right around the corner.