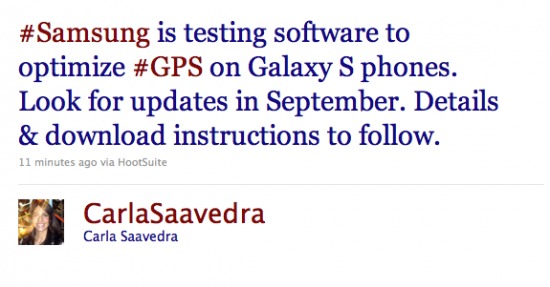 There’s no question that the Galaxy S devices out there in the wild have a GPS situation going on right now. Plenty of folks keep telling us about it, after all. And while it’s all well and good for us, and the owners, to know that there’s a problem, there’s a certain amount of satisfaction that comes from the manufacturing company announcing that they know it exists, and are hard at work on fixing it. That’s what Samsung have just announced, thankfully.

Thanks to Samsung Mobile support’s Carla Saavedra (web product analyst), we have a tweet that states that Samsung is indeed working on an update/fix for the GPS issues that the Galaxy S devices are experiencing. What’s noteworthy, though, is that the update/fix is supposed to show up as a download in September — which is right in line with that whole Froyo update that some Galaxy S devices are supposed to receive. Coincidence? We hope not.