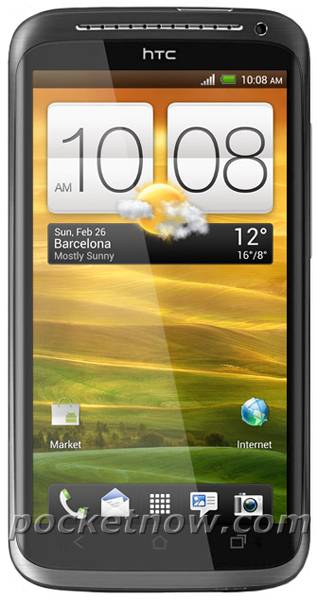 If you’re already sick of HTC’s new flagship smartphone days before its predicted official unveiling, you might want to skip this story. PocketNow got their hands on what appears to be the very first press photo of the new HTC One X (nee Edge, Endeavor) before its Mobile World Congress debut on Sunday. It lines up pretty closely with concept renders, which are all we’ve seen thus far. If there was any doubt that this one was headed for retail soon, it’s pretty much dispelled at this point. This one is headed for Mobile World Congress – note the “Barcelona” location in the weather widget.

A few key differences pop up between this press photo and the earlier render. One, it’s switched to just threee capacitive buttons, the better to jive with Ice Cream Sandwich’s new simplified navigation scheme. HTC seems to be totally avoiding Galaxy Nexus-style virtual navigation buttons on all its new models, at least for the first half of 2012. Second, we get yet another money shot of HTC Sense 4.0, their Ice Cream Sandwich variant of the ever-present manufacturer skin. Otherwise it looks pretty close to what we’re expecting.

The One X is HTC’s first quad-core phone, using Nvidia’s Tegra 3 system on a chip. And considering the HTC twitter post yesterday tagged #5, it’s probably using the latest iteration, 4-PLUS-1, with an extra “battery saver core”. Other important specs for the new hero device include a 4.7-inch 720p display, sub-9mm thickness, an 8MP camera and LTE capability. We’ll be on-hand at HTC’s pre-Mobile World Congress event in Barcelona on Sunday, where this bad boy will finally get its official spot in the limelight. Keep an eye on our MWC 2012 portal for all the breaking news starting on Sunday.