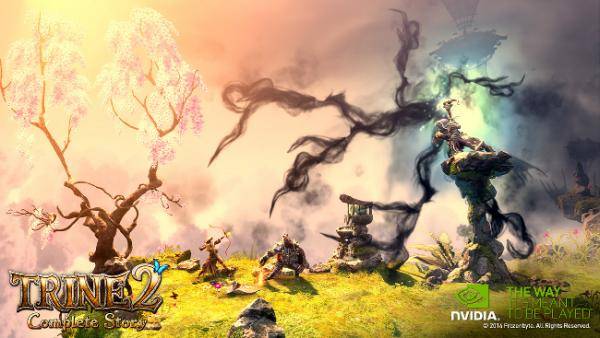 NVIDIA is trying to make waves in the mobile gaming industry again by announcing the NVIDIA SHIELD Tablet today. Although being an Android device, it has access to the entire treasury of Android games on Google Play Store and elsewhere, nothing says “high profile gaming device” than a portfolio made exclusively or at the very least optimized for this gaming tablet.

NVIDIA is announcing, as well as pre-announcing, a bunch of games that it says have been reworked to take full advantage of the Tegra K1 processor running in the SHIELD Tablet as well as add support for the SHIELD Controller, an optional accessory sold separately. Of these pioneers, Trine 2, originally a PC game, bears mentioning as the only one that is exclusively available for this new NVIDIA Tablet and nowhere else, even if it is actually up on Google Play Store instead of just on NVIDIA’s TegraZone listing. Of course, Half-Life 2 and Portal, which are also included in the list, are also NVIDIA exclusives, but they are also available on the older NVIDIA SHIELD, now called the SHIELD Portable, running on a Tegra 4 CPU.

War Thunder is an interesting member of the roster, as it is one that is available on multiple platforms, such as PC, PlayStation 4, OS X, and even Linux. This World War II-themed MMO combat game will be coming this Fall on Google Play Store, though it is not yet known whether it will be exclusive to NVIDIA as well. Other games that are also voyaging from plain Android into the SHIELD realm are Pure Chess, Rochard, Anomaly 2, Flyhunter, Origins, Dungeon Defenders Eternity, and Chuck’s Challenge 3D: Reloaded, all arriving July 29. A completely new game is the first person puzzle game The Talos Principle, also available on Steam, which will still be coming sometime in Fall.

Many of these games don’t exactly come for free. Trine 2, for example, costs $16.99, while both Portal and Half-Life 2 cost $9.99 each. Add that to the $299 and $59 price tags of the SHIELD Tablet and Controller, respectively, you pretty much have the makings of a gaming device that could rival the likes of the PS Vita, not just in gaming but in business model as well.