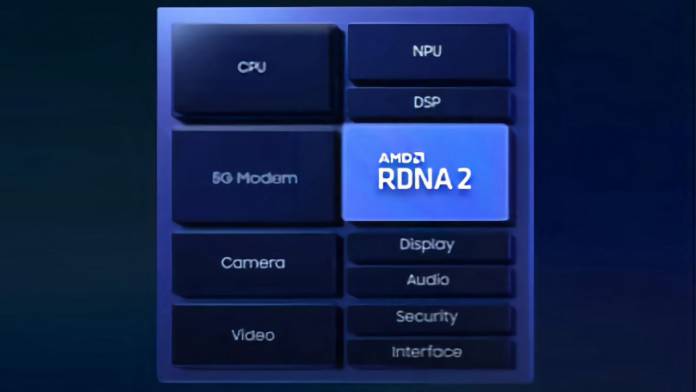 Confirmation came from Samsung at the beginning of this year about the existence of a flagship Exynos chipset having AMD’s custom Radeon GPU. Not long ago at the Computex 2021 conference, AMD confirmed that they are working on a mobile Exynos GPU based on the current RDNA2 architecture scaled down for the mobile platform. The same one used on the PlayStation 5, Xbox Series X and the Radeon RX graphics card. According to leaks the chipset even outperforms the Arm Mali GPU despite throttling, and even the next generation Mali GPU.

The GPU was slated for a June release, but if we go by trusted leakster Ice universe’s tweet, the release is a bit delayed. According to him the Samsung x AMD GPU will now debut in July when all the details of the chipset will be announced.

Just to give a fair idea, the RDNA2 chip had throttling during the first test resulting in 20-percent performance loss. During the second stint, it dropped to 30 percent – but still, it was faster which indicates a core powerful architecture.

It is still not clear whether the chip is being currently developed for a smartphone, tablet or even a compact laptop. The collaboration between the two giants could be an effort to rival Apple’s next-gen M1-powered MacBooks.

This development is building into exciting news for the tech community who can’t wait to see what’s under the hood of the GPU. If we go by Ice universe’s information, the reveal is agonizingly close.