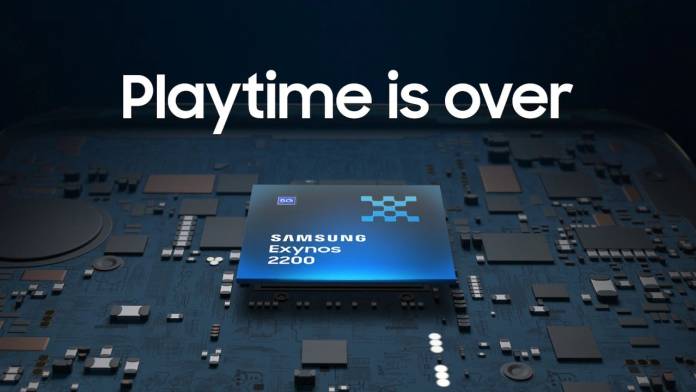 Samsung officially announced the flagship Exynos 2200 chipset last week, but it did not make much fuss about it. The official benchmark figures or the tangible performance capabilities of the AMD graphics-powered SoC have not been revealed yet. In a way we can say that Samsung has been a bit shy in telling the tech community the exact performance figures. Now yet another teaser video of the chipset has been released to generate incremental hype.

The official introduction video here focuses on the gaming-centric abilities of the Exynos 2200 with the PUBG: New State game heavily featured. The South Korean giant is touting it as a processor, gamers have been longing for all this while for mobile gaming advantage.

The video talks of the Variable Rate Shading and Ray Tracing which will bring a new sense of realism to the mobile gaming platform. The AMIGO technology optimizes power consumption of the chipset so that gamers can play for longer on each battery recharge.

Samsung also details-in the cloud gaming prowess of the processor with its 5G modem capable of touching 10 Gbps download speeds courtesy of the 3GPP Release 16 support. This will also bring connection stability thanks to the MIMO and beamforming improvements, lower latency, and overall better power saving.

Other than these capabilities, the Exynos 2200 supports a 144 Hz refresh rate and HDR10+ for great user experience. The twice as powerful NPU means a very potent camera software with support for 200MP stills and 8K video (at 30 fps) in upcoming flagship phones.

The Exynos 2200 SoC will debut in the Galaxy S22 series which will be powered by the Snapdragon 8 Gen 1 in certain regions. It’ll be interesting to see the comparison between the two chipsets in real-life usage scenarios. If Exynos 2200 can live up to the claims, and match or even better Qualcomm’s flagship chipset, it’ll be a huge win for Samsung.