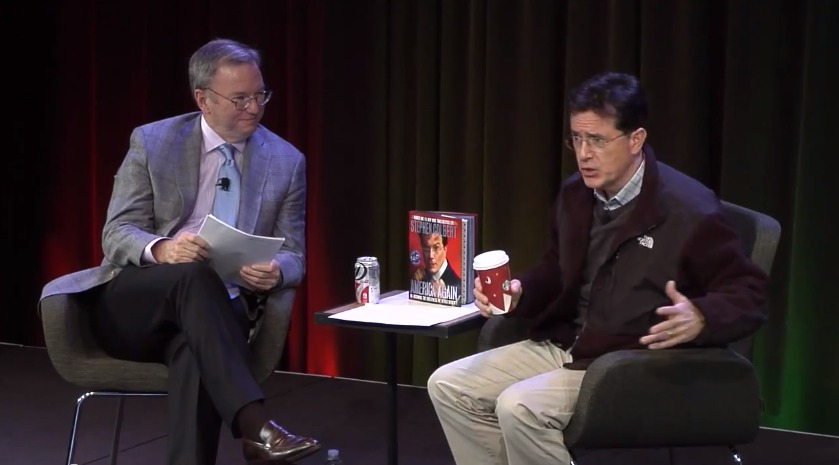 One of my favorite late night TV hosts Stephen Colbert from The Colbert Report is in the Android news world today after being interviewed by Google’s own Eric Schmidt. As I’m sure many of you know (or don’t) Colbert is known for his outrageous comedy and talks of politics, interviews with celebrities and more. Today however in a comedy skit Colbert takes a stop by Google‘s NY headquarters to be interviewed by Google Chairman Eric Schmidt, and it’s certainly worth a watch.

We won’t be talking Android here too much, nor about his Super PAC, but instead about Stephen Colbert’s new book. For comedy sakes he takes some funny and laugh filled questions from Google employees as he and Schmidt try to keep a straight face, and it’s quite enjoyable. For those that watch The Colbert Report regularly this will be funny, for everyone else — he’s a little odd.

The video below is about an hour long, so you can enjoy it if you choose but the fun part here being that Eric Schmidt took a few opportunities to talk about Android, the Google Play Store, and bash Apple at the same time. Something we’ve been seeing from Schmidt a lot as of late. At times I wish he’d stop interrupting and trying to be funny, but he did quite well considering Colbert does this nightly. The good stuff starts about 8 minutes in.

Eric Schmidt mentioned “I should not turn this into an Android commercial,” but after a few moments he got his plugs in where possible. Schmidt used the moment to talk up Android over Apple, and that one rainforest company (Amazon). Stating Android is currently “five times bigger than the iPhone.” The funny interview was all about Stephen Colbert’s new book (don’t ask) but Google’s chairman took that moment to attack Apple too. Mentioning that offering his new book “in the Google Play Store people will actually be reading your book.”

They briefly made jokes about Android, Google, the Nexus 7 and a few other things so it certainly is worth a watch if you’re a fan of Android or The Colbert Report. Hit the links below to see everything Eric Schmidt’s had to say lately regarding Android and Apple.