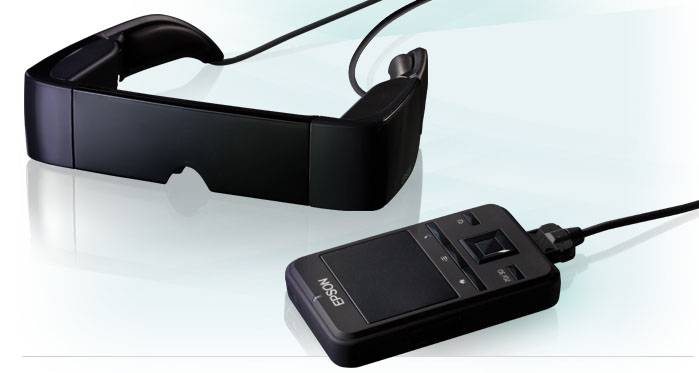 Do you love Android? Of course you do, you’re reading this website. Do you love Android so much that you want to put in on your head and go around looking like an extra from Blade Runner? Have you got seven hundred dollars that you just don’t know what to do with? Then Epson’s Moverio BT-100 might be right up your alley. The video glasses include the standard micro-projection feature for a pair of virtual screens 80 inches in diameter, but interestingly, they’re also semi-transparent, and allow the viewer to see what’s in front of him or her while wearing them. On a bright day. Presumably with no one watching.

The glasses use Android to get their various audio, video and networking functions to work together. Specs include a WiFi connection for browsing, Android 2.2 (really?) with Flash pre-loaded, and a 1GB on-board storage capacity plus a MicroSD card (4GB card included). Controls are managed through a wired remote with a touchpad and the standard Android navigation buttons. Android is more of a means to an end than a feature in this case – it’s used to navigate the interface and manage content, but smartphone-style apps can be downloaded from various third-party stores. Epson publishes the kernel and an SDK, but developers will have to submit apps to the company for consideration rather than going through an app sore.

Ready for the kicker? The Moverio BT-100 glasses retail for a whopping $699.99 of anybody’s money. That’s not outrageous for a head-mounted display, but it’s still a lot more than most of us are comfortable spending on a niche product. $700 will buy you a great 50-inch TV, to say nothing of a brand new smartphone. Let’s wait and see what Google does with its Glasses project, shall we?