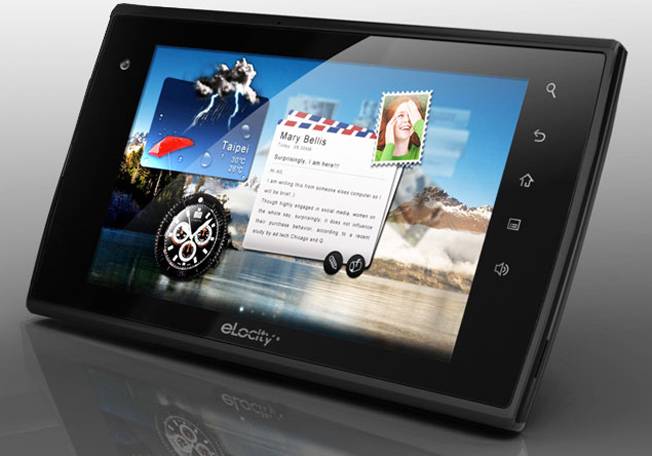 We all know it, CES 2011 will be the tablet announcement central of the world. Many tablets are going to be announced and smaller companies are going to find themselves in a tough situation to differ themselves from the bigger players such as Vizio and Motorola when it comes to their Android-based devices. However, once such company, eLocity, has done just that and gone against Google’s wishes in outing Honeycomb before an official announcement.

Stream TV-owned eLocity will be launching a total of 7 tablets over the coming year and they will all be shown at CES this week. The 7 tablet’s specs are currently unknown but we do know they will all include a dual-core Tegra 2 processor [Honeycomb requirement?], microSDHC support, USB and HDMI ports and be advertised as the A10.1 through A10.7 tablets.

Check out the press release below for the outing of Honeycomb.

PHILADELPHIA, Jan. 3, 2011 /PRNewswire/ — Stream TV Networks announced today it will be expanding its eLocity product line and launching the 10-inch eLocity A10 line of mobile tablets for preorder on January 17th, 2011 at various online retailers. The A10 line will be previewed at CES on January 6th, 2011 (Stream TV Booth 30329), where detailed specifications will be released.

The new 10-inch eLocity mobile tablets will run the Flash-enabled Android 3.0 (Honeycomb) OS with powerful NVIDIA Tegra 2 processors. These models, equipped with ample storage, front facing cameras and HDMI outputs, will be available at varying price points to meet a wide range of user preferences. The new eLocity A10.1, A10.2, A10.3, A10.4, A10.5, A10.6 and A10.7 models will have the highest screen resolution within the mobile tablet category. eLocity A10s launch for online preorder beginning on January 17th at http://MicroCenter.com, http://Frys.com, http://Sears.com, http://Newegg.com, http://Walmart.com, http://bjs.com, http://TigerDirect.com, http://Amazon.com and http://MicroCenter.com. This launch follows the successful introduction of the eLocity A7 seven inch mobile tablet, for which production targets were increased to meet high consumer demand. The eLocity A7 was the first mobile tablet available in the US to run the Android 2.2 OS.

CEO Mathu Rajan of Stream TV comments, “We’re pleased to introduce our new mobile tablets in time for CES. These additional models will make the A Series tablet line more robust and provide consumers with more options to suit their varied needs, while addressing skyrocketing demand for tablet computing solutions.”

The eLocity A7 and A10 tablets optimize portability, connectivity, and computing power like never before in a sleek design. The A Series offers a wide range of mobile apps, supports Adobe Flash and is enabled for 3D gaming with the NVIDIA Tegra 2 T-250 dual core processor. Sporting high resolution multi-touch screens and high speed internal flash memory, the eLocity A Series mobile tablets are multipurpose devices that provide a full entertainment solution along with business productivity and wireless connectivity. The tablets are equipped with micro SD slots supporting up to 32GB of added storage, USB ports supporting up to 64GB of added storage and a 1080p HDMI output.