Times are changing. The smartphone industry won’t die anytime soon. It will only continue to evolve. At the moment, we see displays getting smaller bezels and the cameras coming in dual setups. Improvement in RAM, processors, and storage sizes are expected each year but the more obvious hardware components like the screen and cameras need major upgrades.

DxOMark mobile test protocols have been updated recently to keep up with fast advancing imaging tech. This testing process is a new approach to the sensor and lens test protocols. This also means new criteria for checking the quality of the camera in terms of sensor, image processing, camera control, and lens.

This September, DxoMark started to retest some phones with the new DxOMark Mobile protocols. It’s expected that the rankings will change as the numbers and results change every time. The reviewers started with the iPhone 7 and more will be retested soon. The iPhone 7 was soon followed by the iPhone 6, Google Pixel, Samsung Galaxy S6 Edge, Nokia 808 Pureview, HTC U11, and the Apple iPhone 7 Plus. Most results have changed so the rankings have also changed. 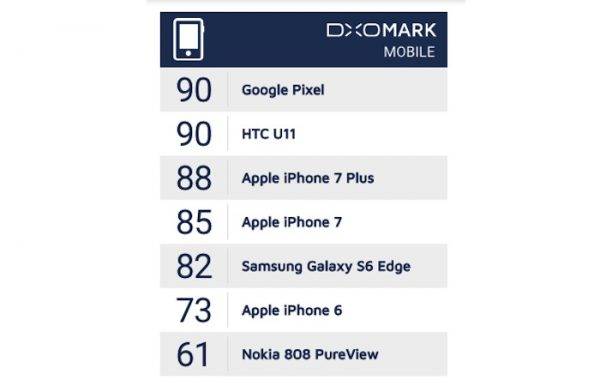 On top of the list is the Google Pixel with a score of 90, tied with the HTC U11. The Apple iPhone 7 Plus is second, followed by the Apple iPhone 7, Samsung Galaxy S6 Edge, iPhone 6, and the Nokia 808 PureView. Note that these phones are only those that were retested with the new DxOMark Mobile protocol.